KUALA LUMPUR: Loan sharks are using foreign mobile phone numbers to harass their targets as they believe it can slow down the process of tracing them, says MCA Public Services and Complaints Department chief Datuk Seri Michael Chong.

At a press conference to highlight new tactics of loan sharks, Chong said retiree Ganesh Kumar, 59, was shocked when he received a video showing a man torching a house four days after his semi-detached house was first sprayed with red paint on June 21.

“When he called the number on the flyer, he was told his son owed them S$6,000 (RM18,000). They sprayed the house again on June 25 and sent videos showing how they torched houses,” he said, adding that Ganesh’s son denied borrowing that much money.

“On June 25, after seeing an advertisement on Facebook, Lee applied to borrow RM10,000 for his online business.

“But only RM1,500 was deposited into his account. The caller claimed they would only bank in the remaining amount of RM8,500 if Lee paid back the RM1,500 plus RM750 in interest.

“Lee paid RM2,250 and told them he wanted out, and that he was no longer interested in taking up the loan.

“But the ah long insisted he should pay RM7,500 in 10 instalments, which Lee refused as he did not borrow that much.

“The ah long then sent two videos to show how they burn down houses,” he said.

Lee lodged a police report in Seri Kembangan before filing a complaint with MCA.

Ganesh, who lodged two police reports over the incident, installed a CCTV after the first spraying incident. He had asked the loan shark to prove his 32-year-old security guard son had borrowed money.

“But he refused to meet me or show any documents, and threatened to burn down my house if I don’t pay,” said Ganesh, who added that the masked culprit was caught on CCTV spraying red paint on his house on June 25.

“On July 4, he was loitering outside the house for half an hour. I wish the police had come when

I called that day as they would have nabbed him then,” said Ganesh, who added that his three-year-old granddaughter was now scared whenever people came near their gate.“She keeps her eyes glued on the CCTV screen, and frantically alert us when she sees anyone passing by. She is traumatised at such a young age.”

IT sector eager to work with new minister 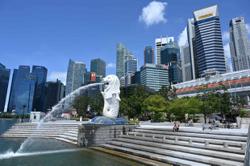