The issue over the alleged recording of a sex tryst involving a minister was raised during debates on the Consumer Protection (Amendment) Bill 2019.

"We do not want a situation where only those appearing in the video recording are investigated.

"How about investigating the hotel?" he said when debating the Bill on Monday (July 8).

He said the government should introduce a new regulation requiring hotels to provide hidden camera detectors.

"I hope that the minister in replying (the debates) will say that the government will take appropriate action to prevent such incidents from becoming widespread," Shahidan added.

He said action was necessary, as personal information of guests can be readily made known to the public.

"Imagine if the images of your wives appear," he said, drawing laughter from his side of the House.

Earlier, Tan Sri Noh Omar (BN-Tanjung Karang) expressed concern that recordings and images of hotel guests could be made viral.

"When we stay in a hotel, video clips and images of the family may be circulated, especially after the homosexual case," he said without citing specifics of his example.

He asked if hotel guests had a right to request the hotel management to check to see if their rooms are free of hidden cameras.

Several Barisan lawmakers voiced their support for such a move.

Former Santubong PKR Youth chief Haziq Abdullah Abdul Aziz had confessed that he was one of the two men at a hotel room in Sandakan, Sabah.

He alleged the recording was of his sexual encounter with Economic Affairs Minister Datuk Seri Azmin Ali, who has since denied the allegations as "nefarious" plot to destroy his political career.

Several police reports were lodge over the video with police investigations still ongoing. 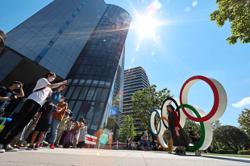