Najib: Purchase of Eagle High done in an 'objective manner'

SEREMBAN: Former prime minister Datuk Seri Najib Razak is unfazed and doubts that the police reports made by Federal Land Development Authority (Felda) against him will have an impact on the Rantau by-election.

“We have the facts on our side. Everything was done in an objective manner,” he said regarding allegations that Felda was made to purchase Indonesian company, Eagle High Plantation TBK, at an inflated price on his insistence.

“The most important thing is the put option. In other words, you can buy back. Eagle High would buy back (the 37% stake) at 6% interest rate,” he told reporters after the meet "Bossku" programme in Kampung Kanchong on Tuesday (April 9) night.

On Tuesday, it was reported that Felda director-general Datuk Dr Othman Omar had lodged a police report, claiming that Najib pushed them into investing US$505mil (RM2.07bil) in Eagle High.

Eagle High is part of the Rajawali Group owned by Peter Sondakh, who Othman claimed was close to Najib.

He also said Felda had to take a RM4.8bil loan to finance the deal from GovCo Holdings Bhd (GovCo), a subsidiary of the Finance Ministry, which was then headed by the former prime minister.

Najib, however, defended the deal.

“You must not forget that the size of the plantation is four times the size of Singapore, and for that 37%, you have to pay a slight premium,” he said.

“But we have covered ourselves with the put option. Felda cannot lose money; only make money,” he said.

“In fact, it reminds me of the time when Maybank bought a bank in Jakarta, Indonesia. They said they (Maybank) overpaid. But when the bank prospered, they actually made money from it,” he said.

Najib was referring to the 2008 acquisition of Maybank Indonesia, known as PT Bank Internasional Indonesia Tbk before its rebranding exercise in 2015.

The acquisition came under fire as the market deemed that Maybank had overpaid for the financial institution at the height of the global financial crisis.

“So when you allow the project to grow, it will make money. But if you politicise it, then you will not get the full benefit from the project,” he added.

Asked if he was concern or worried that he would be charged with this latest case, on top of the SRC case and 1MDB-related cases, Najib said: “No, no, no, no, don’t talk about charging, okay? Don’t talk about that. This is a straightforward commercial deal and the interest of Felda.”

He said the White Paper would reveal Felda's true situation and its financial position.

Earlier in his speech, Najib said that he and his wife, Rosmah Mansor, were victims of slander after it was revealed in Parliament on Tuesday that there was no purchase of a  pink diamond, as alleged.

“Some have apologised to me and asked for my forgiveness,” he said.

“The minister asked us to drink a spoon of palm oil a day. I did a simple calculation: If every Malaysian, around 30 million, including the Bangladeshis, (did that), it will only increase the demand of palm oil by 0.25%.

"The price will not increase with this. Maybe we need to drink a gallon,” he quipped.

On a separate matter, Najib took a swipe at the recent announcemment by Tabung Haji to give hibah (dividend) of 1.25% to its depositors, the lowest in its history.

“During my time, the hibah of Tabung Haji never went below 6.75%,” he said, to a cheering crowd. Chance to own first home for Felda’s second generation 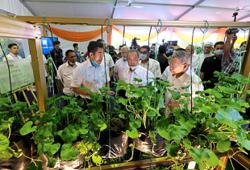