PETALING JAYA: An Indonesian woman succumbs to injuries, bringing the death toll of the bus crash near MASKargo, Sepang to 12.

"An Indonesian woman died while receiving treatment at the Serdang Hospital.

"This brings the death toll to 12 including three other Indonesian women, two Nepalese men, five Bangladeshi men, and the driver who is a Malaysian," he said when contacted on Monday.

It was earlier reported that the factory bus plunged into a monsoon drain along Jalan S8 Pekeliling, near MASKargo, KL International Airport on Sunday (April 7) .

Investigations revealed that the bus was going the wrong way prior to the 11.10pm incident.

He said the 43-year-old driver should have taken the three o’clock exit at the roundabout near the incident, but took the 12 o’clock exit instead.

He was supposed to take the three o’clock exit which leads to MASKargo, where the workers he was transporting were supposed to go, but he took the wrong exit.

The accident took place about 200m from the roundabout.

Death toll rises to 162 in Myanmar jade mine collapse 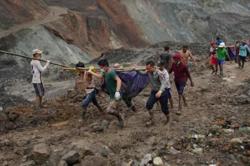