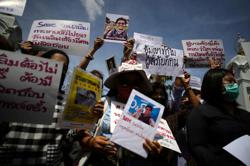 KUALA LUMPUR: After an extensive public inquiry, the Human Rights Commission of Malaysia (Suhakam) has concluded that the police were behind the disappearances of social activist Amri Che Mat and Pastor Raymond Koh.

Panel chairman and Suhakam commissioner Datuk Mah Weng Kwai said the both of them were victims of enforced disappearances and the unanimous decisions in both cases were made after lengthy discussions and deliberations.

Mah said the direct and circumstantial evidence in both cases proved on a balance of probability that they were abducted by state agents, namely the Special Branch, Bukit Aman.

The police were conspicuously absent at yesterday’s proceedings.

Mah said there was no evidence that the abductions were conducted by non-state agents.

He said the basis for the conclusion in both cases was found in the evidence of the testimony of Amri’s wife Norhayati Mohd Ariffin who said that a police officer had told her that the Special Branch carried out the enforced disappearance.

The decisions for both cases were more than 200 pages long.

The inquiry was held under Section 12(1) of the Human Rights Commission of Malaysia Act.

Suhakam noted that there were common features in both disappearances: religious issues, direct surveillance on both Amri and Koh, a similar modus operandi on their disappearances and the presence of a gold Toyota Vios in both cases. It also made several recommendations in its decisions; authorities should respect freedom of religion as a fundamental human right, demarcation between police and religious authorities and reforms to the standard operating procedure of the police.

It also urged a special task force to be formed to reopen both cases as enforced disappearances rather than cases of missing persons.

“The families need some closure and answers can only be provided by the state.

“It is believed that those who have been put in charge so far are withholding the answers to these questions, or are refusing to undertake a diligent exercise to discover them,” said Suhakam.

It added that the special task force should comprise independent investigators to be appointed by the Attorney General.

Suhakam also recommended amendments to make enforced disappearances an offence under the Penal Code and for Malaysia to ratify the International Convention for the Protection of All Persons from Enforced Disappearance 2006.

His car was later found at the construction site of the Bukit Cabang Sports School in the wee hours of the following day.

Amri, who was investigated for allegedly spreading Syiah teachings, was also a mountain climber who was part of the 1997 Mount Everest Malaysian expedition team.

Koh, who founded the NGO Harapan Komuniti, was believed to have been abducted by a group of men along Jalan SS4B/10 in Petaling Jaya on Feb 13, 2017, while on his way to a friend’s house.

CCTV footage believed to be of the incident showed at least 15 men and three black SUVs involved in the abduction, which was done in “professional” style.

Koh’s silver-coloured car bearing the number plate ST5515D has yet to be found.

Commenting on the inquiry’s findings, Inspector-General of Police Tan Sri Mohamad Fuzi Harun told an online portal that he would only respond to the conclusion of police involvement after studying the findings.

Mohamad Fuzi assured the public that he would provide an answer but said it was premature to comment without seeing the inquiry findings in detail.

“Let me read the report first before I officially issue a statement of the matter,” he told the portal in Johor Baru yesterday.

Give us our husbands and justice, say wives

Zahid: I didn’t order abduction of Koh and Amri