KUALA LUMPUR: Malaysians must be the “fort and wall of peace” against religious and racial violence or hate, says Minister in the Prime Minister’s Department Datuk Seri Dr Mujahid Yusof.

“You are the fort of peace, the wall of peace.

“Nobody can intrude upon us because today, you have proven not only to the nation but the whole world that Malaysians choose the path of peace,” he said in his speech at the “Solidarity4Peace” rally at Dataran Merdeka here yesterday.

Mujahid noted that the Christchurch shooter was seeking to sow violence and revenge through his acts.

“It was the killer’s intent that we become violent like him. If we are like him, if we are angry and we want revenge, then we are no different from the terrorists,” he said.

He said that peace-loving Malaysians must act as a barrier against both external and internal threats out to destroy the nation’s unity.

“If there are such ‘species’ in this country who are sowing hatred so that one religion would hate another or one race would hate another, either without realisation or due to political interest, then today, we as Malaysians must become a barrier against those trying to cause disunity,” he added.

Mujahid, who is the minister in charge of religious affairs, later read out the five-point Kuala Lumpur Declaration of Peace 2019.

The declaration stated that the world must be shielded against the culture of hate that can lead to violent acts. It also stated that Malaysians reject any act or culture based on hatred in the name of religion or ethnicity.

He added that Malaysians also condemn any act of discrimination, violence and killing in the name of religion or ethnicity.

Mujahid said the government will carry this message of peace to the world whenever it represents the country in future overseas events.

Earlier, National Unity and Social Well-being Minister P. Waytha Moorthy released a cluster of white balloons to signify solidarity and peace before the declaration was read out and signed by Mujahid. 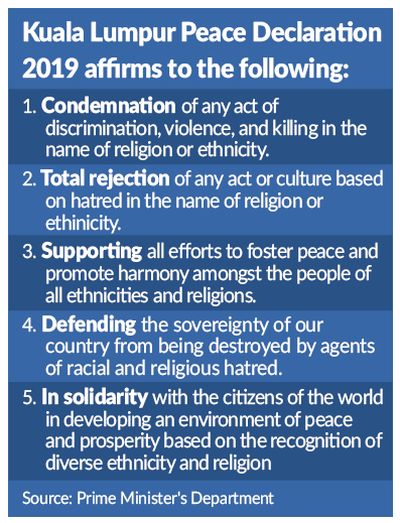