Cashing in on e-wallets

IT’S a virtual wallet you can use to pay for all sorts of things.

Groceries, bills, transport, food, drinks – and the list goes on, with more Malaysians using e-wallets in their smartphones.

Scanning a QR code or tapping a button in the app is all it takes to make payments, either with prepaid credit or charging it directly to your credit card.

At the same time, you can collect points, redeem rewards and enjoy discounts.

It sounds promising, and true enough, e-wallet players are recording more users. They’re also expanding the network of merchants who accept such modes of payment.

At the moment, though, e-wallets are in their infancy in Malaysia.

But it is expected to grow, and as it does, we will take a step closer towards a cashless society.

Cashless payments make up about 20% of total payments in the country, with only half of that involving e-wallets, based on a report last year by The Star.

But, as with any new technology, it also brings new risks, particularly in cybersecurity.

With the use of online payment platforms, the fraudulent use of payment networks and data theft have also gone up, says CyberSecurity Malaysia (CSM).

And yes, they have received complaints about e-wallets.

In the first incident, the victim made a payment to buy e-wallet bitcoins. The transaction used a bitcoin address as the intermediary in the digital money transfer. While the seller showed proof of transaction, the victim did not receive the credits he paid for.

Another e-wallet account was compromised when the victim realised that the balance of the account had been reduced.

“After checking, money was transferred to a suspicious e-wallet address without the user’s authorisation,” explains Dr Amirudin.

Aside from such cases, other scams and risks faced by users include hacking, malware that can give criminals access to devices and sensitive data, phishing attacks in which the user is lured to reveal passwords and other private information.

Some hackers also use ransomware to gain remote access to their victim’s device, blocking the victim from using the device until a sum of money is paid.

There’s also this obvious risk: If you lose your phone, you could lose your e-wallet if it’s not hosted on an Internet service.

And, “If your device’s battery runs out, you will also lose access to your wallet temporarily,” Dr Amirudin points out.

He says data security and confidentiality should be a priority for financial institutions. Continuous investments in people, systems and processes will assure customers that their financial affairs are kept secure and private.

“As such, CSM as the national technical cybersecurity specialist encourages and invites all e-payment or e-wallet merchants and developers to work with us to improve security and ensure the protection of national wealth and economic growth,” Dr Amirudin urges.

Acknowledging that e-wallets are a growing trend here, CSM foresees such platforms fulfilling its potential, transforming not just how consumers transfer money to each other but also how consumers pay for products and services, both offline or online.

“The Fourth Industrial Revolution will affect the landscape of cash transactions, turning it into cashless transaction.

“It is known that cash transactions are costly compared with the efficiency and effectiveness of electronic payments.

“It is a cost effective solution that makes business sense,” Dr Amirudin says.

Quoting a study by the Royal Bank of Scotland and Natwest (Britain’s National Westminster Bank) in 2014, he says a customer who uses mobile and online banking instead of going to a physical bank branch stands to save about 24 hours and about 10km of travelling distance per year.

Among Internet users, smartphone penetration in Malaysia is high, with most subscribed to a mobile data plan.

“With such high penetration of mobile devices, Malaysia is well-positioned to transition into a cashless society,” adds Dr Amirudin.

“From this, new opportunities will emerge, including a greater potential for collaborative opportunities whether at the industry-wide level or between incumbent players and new entrants,” it says in its recent bulletin.

The central bank also agrees that, “shifts towards greater usage of e-payments will also lead to new risks”.

“In this regard, the Bank, in collaboration with the industry, will continue to be vigilant in safeguarding the stability and reliability of Malaysia’s payment systems.

“At the same time, we will promote greater market competition and payment efficiency,” it says. 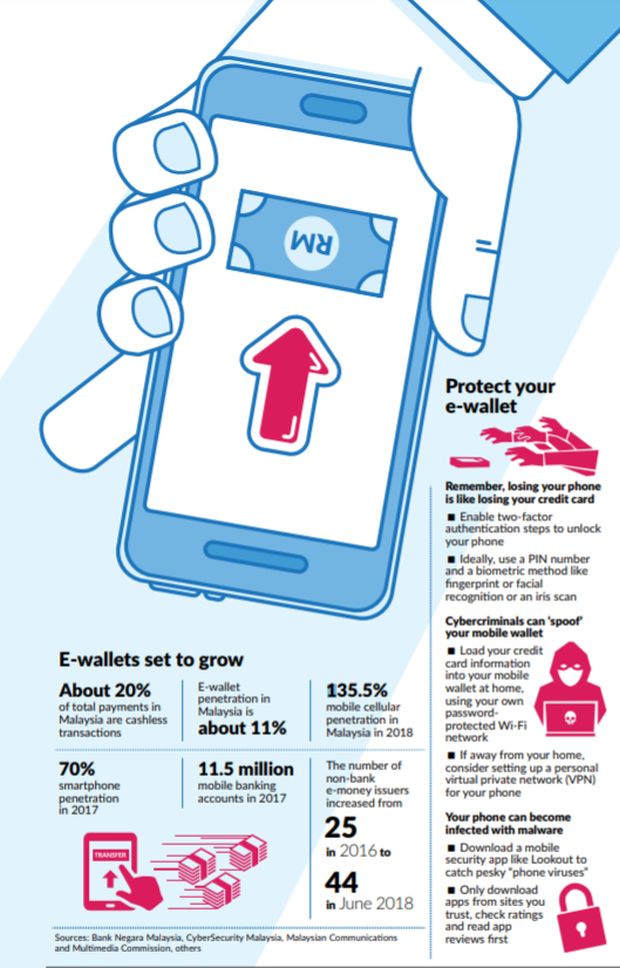 Paying is a breeze for e-wallet users