PETALING JAYA: Due to take off officially in January, the Employment Insurance System (EIS) is expected to provide a safety net for workers who have been retrenched.

Having built up funds for the scheme over the interim period in 2018, workers can expect full-fledged EIS payouts starting on Jan 1.

According to the Social Security Organisation (Socso), a total of RM455mil in contributions had been collected as at October 2018.

Under EIS, the employer and employee each contribute 0.2% of the employee’s salary.

The rate of the EIS contribution and benefit entitlement is however calculated at a maximum wage cap of RM4,000.

“All companies in the private sector that employ at least one employee aged between 18 and 60 years are covered under EIS, except for those in the public sector, expatriates and domestic workers,” he said. He said all types of loss of employment are covered except for retirement, voluntary resignation, expiry of fixed term contract, and dismissal due to misconduct.

“During the interim period, the scheme benefited some 20,000 retrenched workers who received RM600 in monthly assistance for up to three months,” said Mohammed Azman.

“Workers who have lost their employment and fulfil the 12-month contribution qualifying condition are eligible to receive full-fledged EIS benefits,” he added.

These benefits include Job Search Allowance (JSA) in which the insured worker is entitled to receive a cascading percentage of his monthly assumed wage.

In the first month of being retrenched, the insured worker can claim 80% of his assumed wage.

JSA is offered for either three or six months as income replacement during the unemployment period.

Workers who have made EIS contributions for 12 months or 24 months are eligible to claim JSA for up to three months or six months respectively.

Retrenched workers are required to update their job search activity every month to be entitled to claim this allowance.

If the worker is successful in getting re-employed while receiving JSA, he or she is entitled to the Early Re-employment Allowance (ERA), which is 25% of the remaining JSA.

Other benefits insured workers can enjoy under EIS is the Reduced Income Allowance (RIA) and Training Allowance (TA).

Individuals who have worked with more than one company and are laid off by one of them are eligible for RIA.

The monetary benefits of RIA are the same as JSA except that they would be paid in one lump sum.

Retrenched workers are entitled for TA ranging from RM10 to RM20 daily, depending on the insured wages. 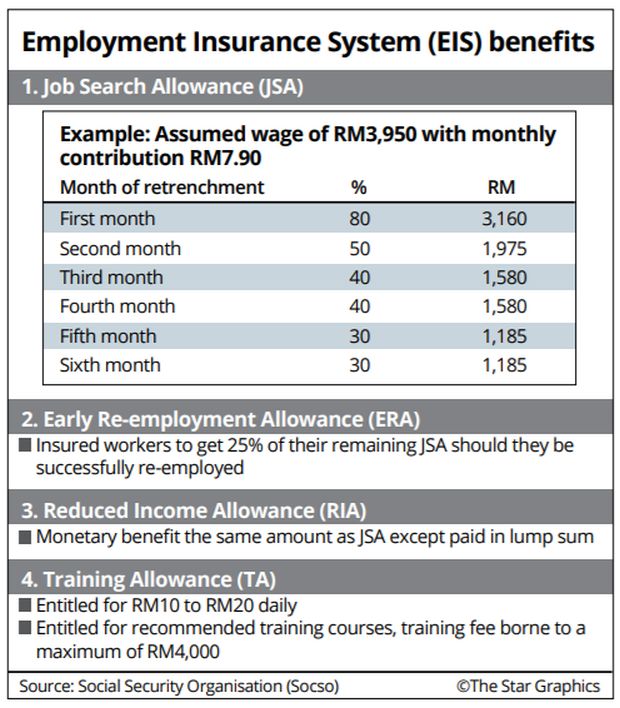 The insured worker is entitled to training courses approved by the Employment Services Officer, with the training fee borne by EIS up to a maximum of RM4,000.

Four agencies are collaborating with Socso to provide training for the insured: the Manpower Department, the Training and Advanced Skill Training Centre, the National Institute of Occupational Safety and Health, and the Socso Rehabilitation Centre.

Mohammed Azman however clarified that in most cases, workers will receive only one or two benefits during their unemployment period.

“This is the case unless he or she is working with three employers and has three separate contributions to EIS and lost all three jobs at the same time,” he said.

Those who have been retrenched are advised to apply for the EIS benefits via the EIS portal (www.perkeso.gov.my/sip) or visit the nearest Socso branch.

The Employment Insurance System Bill was first tabled in Parliament in 2017, with employers and employees making contributions to the fund at the start of 2018.

Finance Minister Lim Guan Eng announced in Budget 2019 that EIS would officially roll out next year.

This should have been introduced earlier, say laid-off workers

MEF, MTUC want EIS to be fine-tuned for improvement