How a spray bottle started it all

PETALING JAYA: Some people may consider ironing a monotonous chore but it was this dull task that sparked the lightbulb in the mind of a housewife in finding a solution to problems affecting society at large.

As Teng Yu Mein sprayed water on the wrinkled clothes she hoped to smoothen, an idea suddenly struck her to come up with an invention to make clean drinking water accessible to marginalised communities.

In 2016, Teng had spent some time with the orang asli community in Negri Sembilan and discovered that their drinking water was of poor quality.

Although the village had piped water, it was murky and the people used traditional filtering methods that included rocks, sand and cloth.

“The water was still dirty but they could not use conventional water filters either because they lacked the right water pressure and electricity supply,” she said.

The problem kept her up at night until she eventually turned to her husband Robest Yong, an inventor, for help.

He helped clear her thoughts by advising her to first look at the root of the problem, which she identified as low water pressure.

She would ponder on how to effectively improve water pressure at minimum cost until that fateful day when she squeezed a spray bottle while ironing. 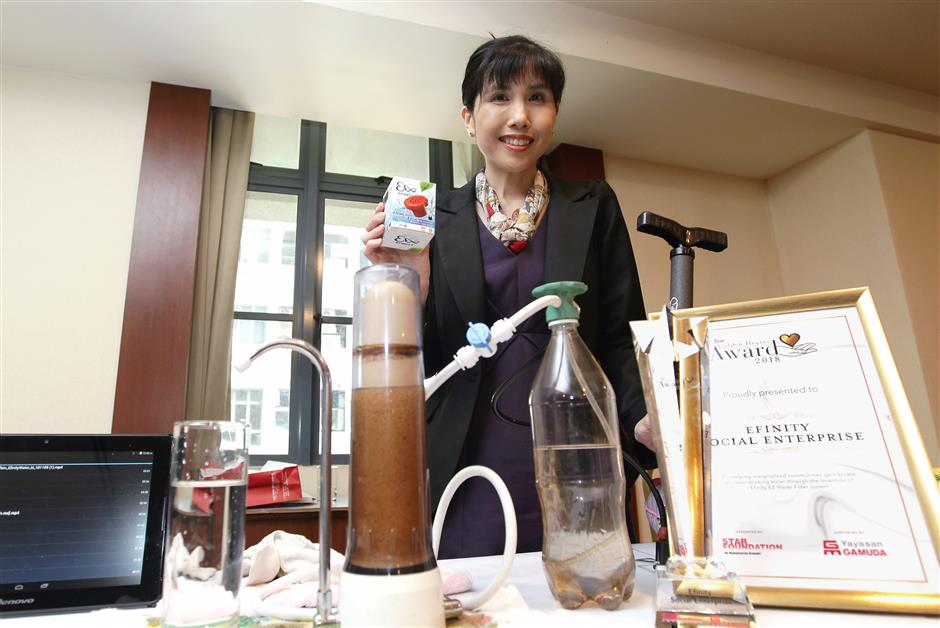 “I realised that the simple pumping motion could create enough pressure to run murky water through a filter.

“That was my Eureka moment, and I drew out my idea many times until I was satisfied with the final look,” she said.

Teng, 46, came up with a pressure cap that could fit the opening of a typical 1.5-litre bottle, which was later known as the Efinity EZ Water Filter cap.

The cap is the first thing Teng, an SPM certificate holder, has ever invented.

Her husband also encouraged her to enter the Yayasan Inovasi Malaysia MaGRis (Mainstreaming Grassroots Innovations) award competition where she was selected as one of the six winners and received RM30,000 to produce a working model.

She started producing the caps in Klang and started supplying them to NGOs and others, who would bring them to targeted communities.

The product later went on to receive the National Innovation Award from the Ministry of Science, Technology and Innovation.

Since then, she has packaged the cap with a simple pump and ceramic filter to create a complete and potable water filtration system that has been used in areas where potable water is scarce such as refugee camps.

In recognition of her dedication to bring a meaningful solution to marginalised communities, Teng was judged as one of 10 winners of the Star Golden Hearts Award 2018.

Moving forward, the mother of one, who considers herself more of a craft artist than an inventor, hopes to raise more capital to make the water filtration system even more compact and affordable.

“I don’t consider myself a woman of science but finding solutions to problems that could change people’s lives for the better is what drives me, and I hope to be able to do much more,” she said.