PETALING JAYA: Malaysia has among the highest incidence of lightning activity in the world, but the country is woefully unprepared for these deadly strikes.

This includes Malaysians being relatively unconcerned about their personal safety during storms to buildings not having the proper protection.

Prof Mohd Zainal Abidin Kadir from the Institute of Power Engineering at Universiti Tenaga Nasional said there are about an average of 12.5 lightning-related fatalities per year in Malaysia.

However, lightning protection expert Hartono Zainal Abidin said that these lightning-related figures may be under-reported as they were mostly derived from news reports.

The danger is that, out of the 365 days in a year, the Klang Valley sees an average of about 240 days of thunderstorms.

This is a stark contrast to cities such as Florida and London which only experience about 80 or 10 thunderstorm days respectively a year, he said.

Hartono added that Malaysian “hotspots” for lightning activity include the Kuala Lumpur International Airport (KLIA), large cities such as Subang Jaya and Johor Baru, and the state of Penang.

A study in 2016 that compiled data from 16 years of observation reported that Kuala Lumpur “stood out as the place with the highest lightning occurrence” in Asia.

According to the study which involves different universities across the globe and led by meteorologist Dr Rachel Albrecht of the University of Sao Paulo, Malaysia takes three places in the top 10 spots with the highest flash rate density (FRD) in Asia.

FRD measures lightning activity by recording the number of flashes per square kilometre per year.

Despite the high lightning activity in Malaysia, experts said that the country is still lacking in its preparedness.

Hartono said there should be a lightning rod installed at every corner of a cuboid-shaped building at the very least, but this was usually not the case. “Most buildings have only one lightning rod, called the Early Streamer Emission (ESE) conductor, placed at the centre of the building,” he said.

“Sirim Bhd rejected this lightning rod in 2000, but a lot of buildings still use it,” he said, referring to the industrial standards body.

Hartono added that four standard lightning rods (known as Franklin rods) should be installed at each corner of a rectangle-shaped building.

Although the thunderstorm season will be ending in November, Hartono urged the public to remain vigilant.

He said the most intense period for thunderstorms are from March to May, and from September to November.

Urbanites have better access to medical help and information on how to face severe weather.

“Urban dwellers are generally better educated, making it easier for them to understand information pertaining to hazards.

“The rural population may lack access to high quality medical faci­lities and digital media with forecasting and thunderstorm warnings, and also do not have enough lightning-protected homes and buildings,” he said.

Prof Mohd Zainal added that those from rural areas may also often have to travel long distances from one area to another, which puts them at risk of hazardous weather. 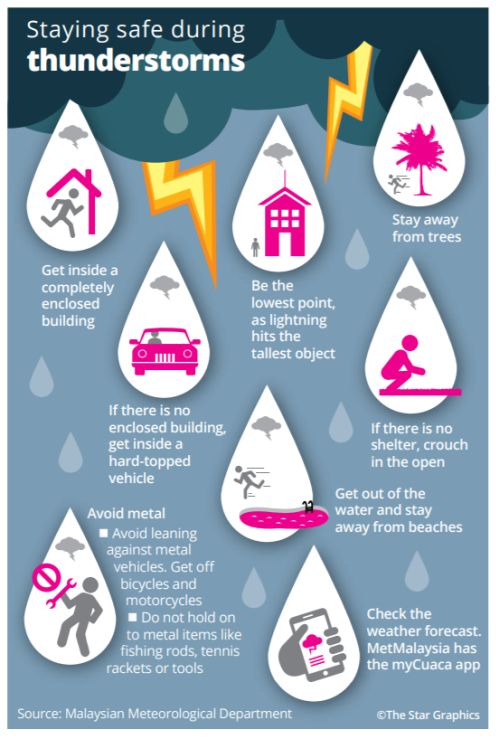