PETALING JAYA: Poor corporate governance and internal controls within troubled 1MDB led to instances where management action and board decisions were not organised properly, said the Auditor-General in its executive summary of the 1MDB audit report.

In its report, the Auditor-General said that 1MDB’s rationalisation plan – assuming there are no new loans after October 2015 – estimated that RM42.26bil was needed to pay the principal and interest that will be due between November 2015 and May 2039.

Those failures were among a litany of issues pointed out by the Auditor-General in its report dated May 15, 2018.

The commitment of 1MDB to the IMTN from November 2015 till 2039 amounts to RM11.9bil, which is made out of RM5bil in principal and RM6.9bil in interest.

The remaining 1MDB loan is estimated to be RM28.21bil, whereas its assets amount to RM27.01bil.

The Auditor-General said that part of its land assets will have to be developed to grow its value and to give 1MDB a return in the future.

The report also said the cash flow analysis between 2010 and 2014 revealed that 1MDB generated only RM1mil in cash. The small amount in cashflow showed the instability of the company because it needed to borrow to pay for its activities.

However, the activities that was financed from borrowings did not generate sufficient cashflow to pay back those loans.

In the Auditor-General’s findings, the department concluded that the overall corporate best practices and controls within the 1MDB group were less than satisfactory.

In many instances, the management and decisions made by the chief executive officer of 1MDB were done in a disorganised manner. Some of these include:

> From 2009 to 2015, some important investment decisions on investments with high absolute values were made via the resolution of the board of 1MDB without proper discussions or deep analysis.

> A few of these investments were risky in nature, yet the decisions on them were made over a very short period of time. However, the chairman of the board of 1MDB had told the Public Accounts Committee on Jan 19, 2016, that discussions had been made before the green light was given via a resolution.

> In a few instances, the 1MDB management had presented information that was not complete nor accurate to the board of 1MDB before an important decision was made. Furthermore, they also took action without the board’s approval.

> There were also instances where the management of 1MDB gave information that was not accurate or was different to interested parties.

The management of 1MDB took action that was different or did not follow fully the decisions made by the board and stakeholders for a few investments.

> Lastly, the filing and records for 1MDB were not systematic and not satisfactory. 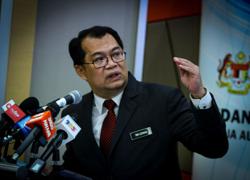