GEORGE TOWN: A large crowd gathered outside the High Court waiting for Penang Chief Minister Lim Guan Eng to arrive for his trial on two counts of corruption.
At around 8.40am, Lim arrived at the court with his lawyers.
Businesswoman Phang Li Koon arrived about five minutes earlier.
On June 30, 2016, Lim pleaded not guilty to charges of corruption over the conversion of land from agricultural to residential and the purchase of a plot of land and bungalow at below market value. 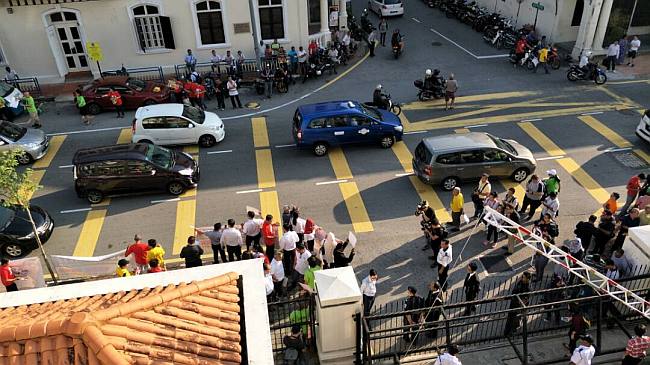 The crowd waiting outside the court house.
He was charged with using his position as Chief Minister to gain gratification for himself and his wife, Betty Chew Gek Cheng, by approving the application for conversion of agriculture land to a public housing zone in southwest Penang to a company, Magnificent Emblem Sdn Bhd.
Lim faces a second charge of using his position to obtain for himself a plot of land and a bungalow at No. 25, Jalan Pinhorn, George Town on July 28, 2015, from Phang for RM2.8mil, below the market value.
Phang is charged with abetting.