Only nine and she’s already having suicidal thoughts

PETALING JAYA: Only nine but withdrawn, tearful and suicidal.

“Jane wrote an essay about killing herself after being called nasty names on Facebook. She didn’t have the maturity to deal with the onslaught of such remarks. And she developed childhood depression.

“Although her mother has Jane’s password, she was too busy with work to monitor the account until a teacher alerted her of the girl’s change in behaviour,” said Malay-sian Mental Health Association deputy president Datuk Dr Andrew Mohanraj.

In Jane’s case, he said the girl was so preoccupied with every comment her friends made, so much so that she wanted to end her life.

“Social media can cause havoc as it’s difficult for children to handle it emotionally,” he said.

Noting that these victims were getting younger, he said cases of psychological distress caused by social media interactions were common.

Letting young children spend long periods of time on social media is dangerous, he said, especially for those below the age of 13.

Social media impacts emotional development as users no longer feel the need to invest in real interactions, he said.

“They can be devastated by what they perceive as a rejection, or derogatory remark, towards them.”

Worse, social media exposes them to manipulation and coercion when children are still learning to make good decisions, he added.

“Many shy children and teenagers also end up spending excessive time in Internet forums meant for the lonely.”

Parents, he said, must know how social media works and lead by example.

“It’s a challenge for parents to become role models when they themselves use social media excessively,” he said.

He advised them to be conversant with security settings before allowing children to operate an account.

“Comply with the age limit. It’s irresponsible to allow a child under 13 to be on social media even if the accounts can be accessed by parents.”

The Government is drawing up modules for schools to prevent children from falling prey to the dangers of the Internet and to fight cyberbullying.

CyberSecurity Malaysia (CSM) chief executive officer Datuk Dr Amirudin Abdul Wahab said a pilot project would be rolled out next year and full implementation to be carried out three years from now.

From the national study last year, CSM also developed a Child Online Protection and cyberparenting initiatives, to be carried out under the 11th Malaysia Plan.

“Our duty is to increase cyber security and safety awareness among all Internet users. And that includes inculcating positive Inter-net use as a way of life among school children,” he said, urging the public to visit www.cybersafe.my for tips and cyber safe best practices.

The Net can be a trap for kids

Learning to be safety-savvy online 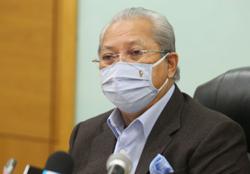