Low awareness on recycling among Malaysians

“This shows that there is still a large portion of solid waste being disposed in landfills and not deviated to recycle,” he says.

It also means that Malaysia is very much behind compared with a number of developed countries.

Dr Mohd Pauze said the reason for the low recycling rate is due to a “much lower” level of awareness on the 3Rs: Reduce, Reuse and Recycle here.

“To address this problem, SWCorp believes that public knowledge and awareness of 3R should be enhanced from time to time especially the importance of implementing 3R and solid waste segregation,” he says.

“We have programme with schools, kindergartens and also recycling modules for teachers to promote recycling activities,” Dr Mohd Pauze says.

“Recycling programmes are being done along with Separation at Source initiatives,” he adds.

SWCorp is also providing talks and exhibitions to other target groups such as those in colleges and universities, the private sector and non-governmental organisations.

Public access to recycling facilities is also something SWCorp is striving to improve.

Dr Mohd Pauze says that access will be made more convenient by providing recycling cages in non-landed housing areas and enforcing “Separation at Source” for states that implement waste segregation. 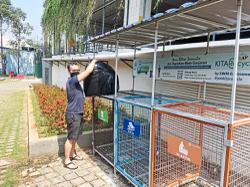