In welcoming the good news, MTUC president Abdul Halim Mansor pointed out the EIS would protect workers who could lose their jobs due to uncertain economic conditions and with increased automation by many industries.

However, Abdul Halim said MTUC wanted the rate of contribution for the scheme to be increased to better protect workers who lost their jobs.

“We must not ignore the fact that retrenched workers still have bills to pay and families to feed,” he said.

He urged the Government to speed up implementation of the EIS, pointing out that many countries have it and that MTUC was disheartened by objections from local bosses.

“They are not thinking about the welfare of workers and their social responsibility,” said Abdul Halim.

Based on statistics from the Labour Department, he claimed that an average of RM65mil in retrenchment compensation went unpaid by employers between 2007 and 2016.

“Close to 100,000 workers were deprived of termination benefits and this made a mockery of our laws,” he said, referring to court

rulings that required employers’ companies be wound up if they were unable to pay compensation.

Earlier yesterday, representatives from at least 90 industry and trade-based organisations voiced concerns over the EIS.

Malaysian Employers Federation executive director Datuk Shamsuddin Bardan said EIS was not practical as the retrenchment rate was less than 1% over the past two years.

“We are talking about the whole workforce contributing to a large pool which will be used to serve a minimal number of people,” he said.

Based on briefings with the Government, he said, both the employers and employees were required to contribute 0.25% of the employees’ salaries to a fund managed by Socso (Social Security Organisation).

The money, he said, would be used to help those retrenched but did not receive their termination benefits.

This group would be paid half of their last salary until they find a job or for up to six months, added Shamsuddin.

Shamsuddin said an estimated RM1.142bil is expected to be collected by EIS annually based on 6.8 million people in the private sector.

He said lay-off and retrenchment benefits under collective agreements were good enough to protect the employees.

Instead, he proposed for employers who do not pay retrenchment benefits to be charged in court. 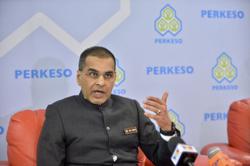