Caskets containing the remains of AirAsia QZ8501 passengers recovered from the sea are carried to a military transport plane before being transported to Surabaya, where the flight originated, at the airport in Pangkalan Bun, Central Kalimantan Jan 2, 2015. -- PHOTO: REUTERS

PANGKALAN BUN: It's been almost a week since AirAsia flight QZ8501 went missing but recovery teams have yet to locate the black box flight recorders, though they have recovered 30 bodies, including some strapped in their seats, and spotted debris resembling parts of the tail.

“Our team found what we suspect is a fraction of the aircraft tail,” The colonel said on Friday. “It was at the bottom of the sea, at 29 meters deep.”

Mr Bambang Soelistyo, head of Indonesia's National Search and Rescue Agency (Basarnas), told media on Friday night that it has yet to confirm if the object is part of the tail.

Oil spill was also found in the red zone which has been given priority in the search. The zone is close to Kumai Bay.

Separately, AirAsia's Surabaya-Singapore and Singapore-Surabaya routes were suspended by Indonesia's transport ministry due to a breach of contract by the airline.

In a press statement issued on Friday, the transport ministry said AirAsia, based on an Oct 24, 2014 contract, was allowed only to fly Surabaya-Singapore-Surabaya route on Monday, Tuesday, Thursday and Saturday, but in practice the airline flies that route on Sunday.

"The suspension starts on Jan 2 and will remain, pending the result of our evaluation and investigation," said the statement, signed by the ministry's spokesman, Mr J. A. Barata.

"AirAsia has never filed for a request to revise its schedule. It is a breach of agreement," the statement added.

Of the 30 bodies recovered, four have been identified. Police said three Indonesians, including stewardess Khairunnisa Haidar, passengers Grayson Herbert Linaksita and Kevin Alexander Soetjipto, were identified based on their fingerprints and medical records.  It came after the identity of passenger Hayati Lutfiah Hami was confirmed.

But strong wind and heavy seas was again hindering divers' search for the fuselage of the plane, which went down on Sunday en route from Indonesia’s second-biggest city Surabaya to Singapore with 162 people on board. No survivors have been found.

Basarnas officials told reporters on Friday that the search was now focused on a 5 sq km area of the sea where debris had been emerging.

"The more evidence and debris we found the closer we could locate the fuselage," said Basarnas director of operations S.B. Supriyadi.

"We are focusing on this 5 square km of the sea where debris kept emerging. We picked up debris on that area earlier, including an escape slide, but then more emerged." 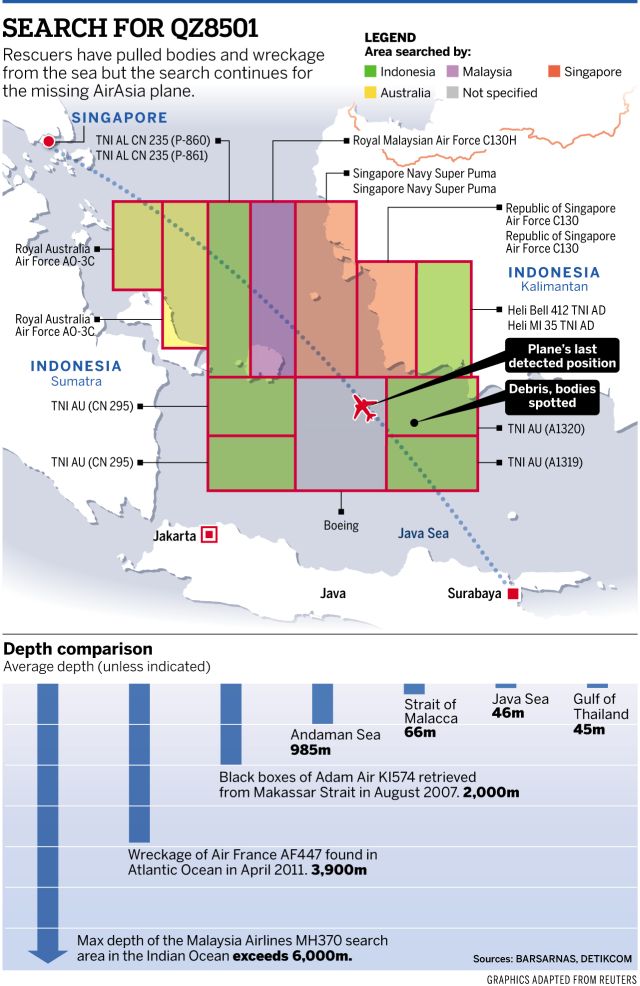 “There are two main tasks in this priority sector: First, to locate the biggest part of the plane’s body. The second task is to find the position of the black boxes, or flight recorders, which will be carried out by the KNKT (National Transport Safety committee) which start working today,” Bambang Soelistyo told a press conference.

“Divers are already on standby at the navy ship Banda Aceh to dive on that priority area to locate the body of the plane,” he said. “I hope we’ll get a significant result Saturday.”

Two ships carrying hydrophones, or underwater listening devices, left the southern Borneo port of Pangkalan Bun on Friday, Indonesian officials said. Aboard one vessel were experts from France’s BEA accident investigation agency, which attends the crashes of all Airbus planes, although officials were unsure if the weather would allow the sensitive hydrophones to be deployed.

"After sweeping the area for more than two hours, at 11:58 the (Orions) found three bodies sitting in one row," he said, and another three just minutes later.

They informed warships by radio and fired flares to indicate the location for retrieval, he said.

Supriadi said it was raining at the suspected crash site on Friday morning, with waves 3-4 metres high and wind speeds of 30-40 knots.

The plane had gone missing on Dec 28, 2014, and debris were found three days later in the waters south of Kalimantan region. Indonesia is leading the multinational search-and-recovery operation with help from Malaysia, Singapore, Britain, and the United States. Japan on Friday morning also despatched two vessels to the Java Sea.

Given that the plane crashed in shallow seas, experts say finding the boxes should not be difficult if the beacons, with a range of 2,000 to 3,000 metres, are working.

Singapore's Autonomous Underwater Vehicle was flown in on Thursday, while the navy's MV Swift Rescue joined its three other vessels to conduct search operations in the area, a statement by the Ministry of Defence said. Another countermeasure vessel, the RSS Kallang, will reach the sea area on Friday, the statement added.

Defence minister Ng Eng Hen also said that Singapore navy on board RSS Valour had recovered some pieces of equipment and debris that were from QZ8501. "The search effort continues and I know our servicemen and women are putting in their best efforts," he wrote on his Facebook page.

Of the 30 bodies recovered, 10 were en route to Surabaya on Friday night, four at Pangkalan Bun, eight on board naval ships and another eight in Surabaya.

Among the debris recovered were two black bags, one grey suitcase and a few pieces of metal, but priority remains locating the biggest chunk of fuselage.

Toos Sanitiyoso, an air safety investigator with the National Committee for Transportation Safety, said he hoped the black box flight data and voice recorders could be found within a week, suggesting there was still doubt over the plane’s location.

"The main thing is to find the main area of the wreckage and then the black box,” he told reporters.  None of the telltale black box “pings” had been detected, he said.

Investigators are working on a theory that the plane went into a stall as it climbed steeply to avoid a storm about 40 minutes into the flight. Experts also said that initial information point ot the possibility that the aircraft may have managed to land on sea but could have been overcome by high seas, AFP reported.

Authorities have been collecting DNA from relatives to help identify the bodies.

“We are asking universities to work with us – from the whole country,” said Anton Castilani, executive director at Indonesia’s disaster victims identification committee. – Straits Times/Ann