KUALA LUMPUR: In a gruesome murder that has left many shocked, a man abducted a two-year-old, killed her and beheaded her apparently with a ceramic tile, before jumping into a river.

Police believe they have identified the assailant, a man in his late 30s and an ex-convict.

A source said CCTV footage at the complex showed a security guard watching the man walking away with Siti Soffea Emelda Abdullah.

But the source added that the guard may not have realised the girl was being abducted.

In a more bizarre turn of events, there were also some who believed it was a ritual killing, claiming that the attacker tried to drink her blood.

Siti Soffea was with her mother Siti Salmy Suib, 32, at the Kota Raya shopping complex here when the woman needed to use the toilet on the fourth floor at about 3pm on Thursday. 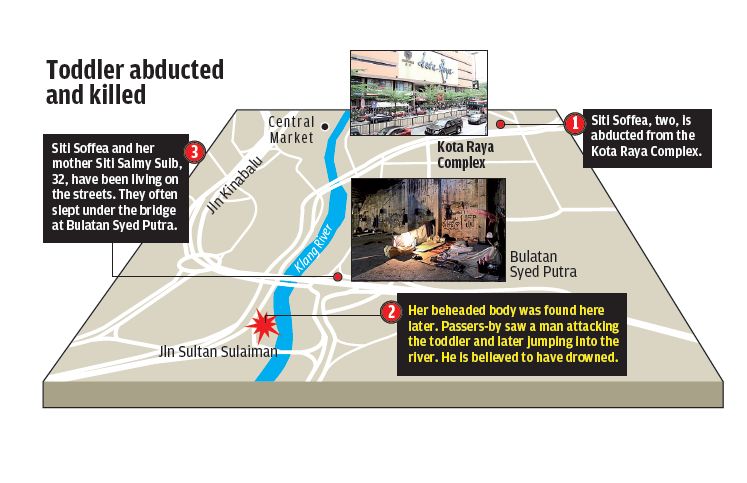 Siti Salmy left the toddler with friends when she went to the toilet. When she came out about five minutes later, Siti Soffea was not with her friends.

They searched the building but could not find the girl.

Siti Salmy only learnt of what had happened to her daughter when police tracked her down and alerted her later that night.

At about 9pm, a man was seen carrying Siti Soffea towards the bank of the Klang River, about 1.5km from the complex, by several passers-by.

A witness, who asked to be identified only as Mohammad, said he was bathing in the river when he saw a man bent over something that looked like a doll.

“When I moved closer I realised it was a small girl whose head was partially submerged in the water.

“The man noticed me approaching and turned to look at me,” said Mohammad, who claimed he saw the man drinking blood oozing from her head. 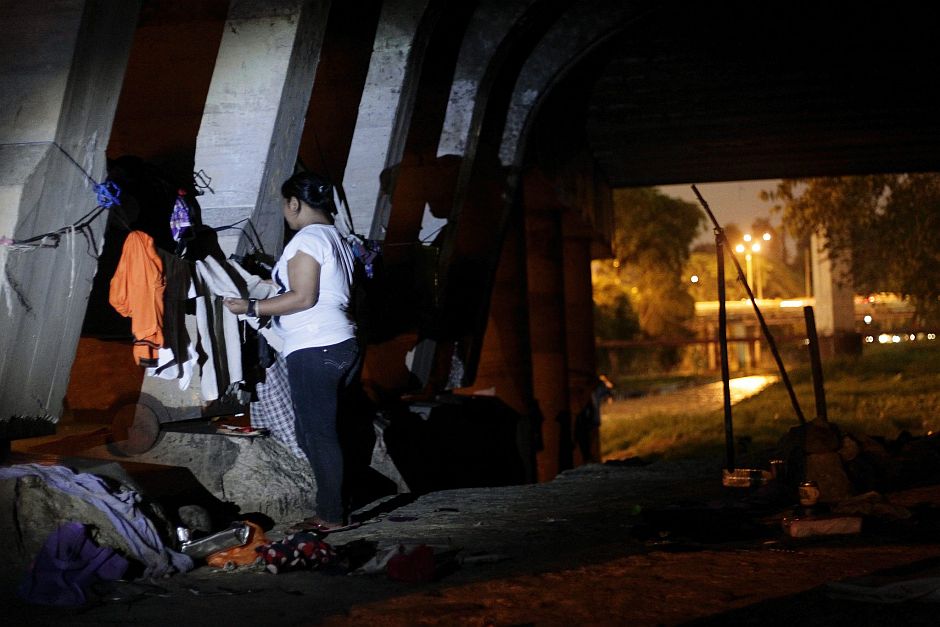 No where else to go: Living conditions of a group of homeless people living under a bridge near the scene where the toddler was killed. — AZMAN GHANI / The Star

Mohammad, 29, who lives under the bridge, then asked his friend, Las, for help.

Mohammad and Las both claimed that they saw the attacker slash at the girl’s neck with a broken piece of tile. They also said the man had a bottle of what looked like blood.

Mohammad told Las to stay put while he went to fetch the police.

“When the policemen arrived, the man jumped into the river and tried to swim away,” Mohammad said.

“The suspect was struggling to swim and was being carried away by the current. We believe he drowned,” he said.

According to SAC Gan, Siti Salmy did not lodge a police report about her daughter going missing.

“We managed to track her down after the incident at the Klang River,” he said.

Police, fire and safety, City Hall and civil defence personnel were deployed to search the river for the man’s body but have not found it yet.

SAC Gan said police recovered several ceramic tile shards with traces of blood and a pair of slippers believed to have belonged to the attacker.

NGO: Mother of toddler girl living on the streets