Express bus crashes into tree and overturns near Tangkak, killing 10

MUAR: Ten people, including a nine-year-old girl, were killed when the express bus they were in skidded and crashed into a tree at Km146.5 of the North-South Expressway near Tangkak.

They were among 26 passengers and two drivers heading to Johor Baru and Singapore from Perak during the 2am mishap on Sunday.

Seven died at the scene while the others succumbed to their injuries at the Sultanah Fatimah Specialist Hospital here. Death bus: Rescuers looking for survivors in the wreckage of a bus at the 146th kilometre stretch of the North-SouthExpressway near Tangkak in Johor early yesterday. Ten passengers, including a nine-year-old girl, were killed when the expressbus skidded and crashed into a tree before landing on its side in the 2am accident.

Ho was a Hong Kong national who had a Singapore permanent resident status.

Eighteen others, including the two bus drivers, were rushed to the hospital. Some were given out-patient treatment

According to a passenger Goh Sie Kiat, 31, who was going to Singapore to work, the roof of the bus was ripped off by the impact. 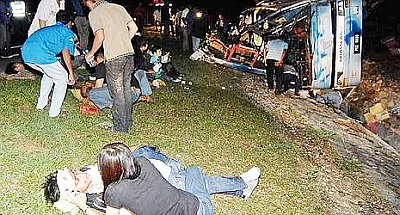 He said he managed to pull a 12-year-old boy, who had leg injuries, out of the wreckage.

He urged eye-witnesses to contact the Muar police to assist in the investigations.

Fuh’s husband Goh Seng Ren, from Taman Seri Putri in Johor Baru, said he rushed to the hospital after being informed at about 3am.

He said his wife and daughter had gone to Perak to attend a relative’s wedding. Transport Minister Datuk Seri Ong Tee Keat said an investigation would be carried out and if negligence was found to be the cause of the accident, stern action would be taken against those responsible.

In Johor Baru, Plus Expressway Berhad corporate communication general manager Khalilah Datuk Mohd Talha said it was the first time a major accident had occurred at that location.

“We have sent a technical team to the site to identify the cause of the accident,” she said.