KUALA LUMPUR: Police have recovered a sharp object believed to have been used in the murder of a 39-year-old Singaporean who was chopped into 11 pieces and stuffed inside a fridge at a posh condominium in Mont Kiara.

The object was recovered from the condominium.

Police, who were keeping mum on the kind of weapon that was recovered, have sent it to the Chemistry Department for analysis.

It is learnt that relatives of the man, who has been identified as Goh Yoke Seng, had given their blood samples to the authorities in Singapore yesterday for DNA analysis to confirm his identity.

It is also learnt that the blood samples will be sent to Malaysia today.

The man, who was reported missing in 2005, is believed to have been killed about a year ago.

Last Sunday, a man who had bought the condominium in an auction, made the gruesome discovery.

The owner, in his 30s, had gone to clean the condominium on the 19th floor.

The place had been vacant for more than three months and the man, who only received the keys last Friday, decided to clean up the property with his sister at about 3pm.

He suspected something amiss when he smelt a strong stench after opening the condominium door.

He called the security guards, who found the body parts in the refrigerator that had been sealed with masking tape.

At the scene, police found a photocopy of a driving licence belonging to a woman named Nora Jawi Spreen Jawi, whose last known address was USJ2/4D, Subang Jaya.

A 33-year-old woman has since been remanded over the murder. 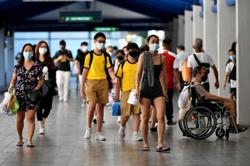