Teen solves problems one bot at a time DESPITE the Covid-19 pandemic casting a shadow over the world, the past couple of years had been an exciting time for Michael Yoon Kay Ren.

Like a sponge, he had soaked up new knowledge with every online course he enrolled in, from computer science and artificial intelligence (AI) to game development and web programming with JavaScript.

Having completed these introductory courses – conducted by Harvard University, the Massachusetts Institute of Technology and IBM – he has gone on to develop several AI projects aimed at solving problems that he found interesting or encountered in his daily life. From his keen interest in these information technology (IT) fields, one may think Michael is a tertiary student but he is in fact only 14 years old.

Among the solutions he has devised through his AI projects included classifying coins from different denominations, generating music with a creative twist, and building a bot to complete his languages homework within a couple of seconds.

“I knew my school would not be too proud of the latter. I did not actually use it to complete my homework but was experimenting with the possibility of automating tasks from websites,” the Kuala Lumpur-born student who is currently pursuing his studies at a grammar school in the United Kingdom told StarEdu.

Last year, he even created an app that would send a push notification to his mum once he arrived at school so that she would not be worried about his whereabouts.

He has since published the app on Google Play Store, he divulged.

What got Michael started in the first place was his love for playing video games.

Being introduced to the online courses during the pandemic got him to venture even deeper into the world of IT, namely, in the areas of AI, coding and computer science.

“My mum first found an online course for me to learn and this really got me interested in coding.

“I love the limitless potential of computer science and the aspect of automation, and being able to create programs to do laborious tasks,” he said, adding that the online courses had equipped him with various skills such as algorithm, syntax, and web and app development.

But his learning journey was not without challenges. As in school he had not reached the scope of mathematical knowledge required for the courses, he had difficulty understanding some of the AI concepts that were heavily based on mathematics.

“To overcome that, I would look at several explanations from different sources to get a good understanding of the topics,” he recalled.

Believing in lifelong learning, he urged more Malaysians to broaden their IT horizons.“It is never too young or too old to learn as I know some of my dad’s friends took up the courses after I shared my completion.

“Furthermore, more and more jobs are being taken over by robots at an astonishing pace and the only way to keep on top of that is to learn AI,” he said.

To improve his skills, Michael is constantly on the lookout for opportunities to gain relevant exposure and feedback such as through his YouTube channel, websites and apps.Realising that having relevant experience is just as important, he also took the initiative to join a hackathon where he worked with a group of coders to solve global problems using AI.

On his career aspirations, he said he aims to work in technology corporations such as Google and Microsoft as they have “state-of-the-art natural language processing”.

“I hope to be able to learn and understand more about how language correlates with AI.

“I also hope to build my own software company, linked to automation and AI,” he said, adding that he aims to change the world for the better through his AI projects, and to eventually develop programs like autonomous vehicles.

For those keen to develop their passion for science, technology, engineering and mathematics (STEM), Michael had this to say: “It is crucial to have a desire to learn and to explore the field that you like.

“Use your passion and link it up with your interests, for example, if you love technology and love to read, then you can combine the two and build some software that would convert books into audiobooks for you to listen to.”

Weng Sam, 19, a student in Pahang, is a participant of the BRATs Young Journalist Programme run by The Star’s Newspaper-in-Education (Star-NiE) team. To join Star-NiE’s online youth community, go to facebook.com/niebrats. 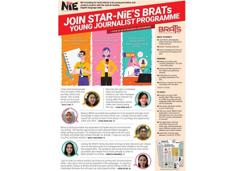 Why some Malaysian youths are going bankrupt - Insolvency Dept: Over 20% of bankrupts are youths
How young Malaysians can avoid being poor
‘Teach us how to manage money wisely’
PENINSULA COLLEGE FULFILS EDUCATION
Royal plan to ‘future-proof people’
Urgent need for reform
How to conduct a parent-teacher meeting
Cash, laptops to aid community
M’sian teens pen their way to the top
Don't miss it: GREAT Scholarships 2023