Dyslexic but not deterred

WRITING emails is part and parcel of one’s professional life. It is simple and straightforward but it takes Taylor’s University School of Education head Dr Logendra Stanley Ponniah (pic) twice or thrice the duration needed by his colleagues to do so.

His process involves tools like a spell checker, a speech-to-text application and a text-to-speech reader.

The reason for the hassle is that he has dyslexia, a condition that he has had to live with for 51 years.

Growing up, Logendra struggled with spelling, reading and writing so much so that he was always “the last boy in the last class” in his exam performance, he told StarEdu.

Thinking that he was simply not applying himself, his parents and teachers gave him a hard time.

“I got a lot of scolding and punishment. I was asked to be more hardworking and to do spelling every day, ” he recalled, adding that there was a lack of understanding of dyslexia as a problem among students in the late 80s to 90s.

“The common notion when you misspell a word is that you are lazy to memorise. Spelling is not something you learn. It’s an audio-visual connection. Being a dyslexic, that part of the brain is not well connected, ” he said.

Secondary school with its “very text-centric” exams posed a bigger challenge for Logendra.

“If you spell a word, for example hydrogen, wrongly, your answer is considered wrong from the teacher’s perspective, even though you know the answer. That’s the style of marking, ” he lamented.

It was only when he was studying in the United States in the early 90s – he failed his SPM so he couldn’t gain admission to a public university in Malaysia – that the riddle of his learning difficulty was solved.

One of Logendra’s lecturers recognised the possibility that he may be dyslexic and suggested that he go for a diagnostic assessment.

“This lecturer recognised that whenever I was questioned orally, I was able to answer most of the questions but when I wrote the answers down, they were mostly wrong.

“Another indicator was that my penmanship tended to be very jagged and not symmetrical, ” he shared.

Having been diagnosed as a dyslexic, albeit at the age of 20, Logendra felt a huge sense of relief.

“The biggest help is to recognise there’s nothing wrong with you. There’s a lot of emotional baggage from being told you’re stupid for 20 years of your life, ” he said.

Another development he experienced in the US that he considers a blessing was the introduction of personal computers to his academic life.

“We could type and submit reports, instead of handwriting them. There were devices that helped me with spelling, ” said Logendra, who studied mathematics and physics at the University of North Alabama.

“Although I had no natural passion for the subjects, I chose them as they work hand in hand with my disability. They require me to write the least, unlike language subjects, ” he revealed.

Upon his graduation, Logendra returned to Malaysia and found a job as a temporary teacher at Kolej Tuanku Ja’afar in Mantin, Negri Sembilan.

He had planned to teach for a couple of years before going back to the US to pursue a postgraduate degree in mathematics.

What he had intended to be a short stint, however, turned out to be a calling for him.

“I had an excellent principal called Mr Stuart Morris, who manifested the light of a teacher.

“I used to despise the teaching profession because teachers were the first people who used derogatory terms on me. Mr Morris helped me see the profession in a different light, ” he said.

Logendra also attributed his passion for teaching to his ability to connect with students who needed extra help.

“I was very effective working with kids struggling with their studies, especially mathematics. I could relate to their sense of inadequacy, ” he explained.

As he gained more experience, he began reading up educational research on more effective ways of teaching mathematics.

That led to him carrying out further research through his master’s programme at Deakin University in Australia and later, problem-solving in calculus through his PhD studies at the International Islamic University Malaysia.

“That was my journey as a full-fledged academic. It’s a journey of many coincidences, ” he said.

Logendra is thankful for having technology tools to help him cope with his job at Taylor’s University, where he has served in various capacities for 17 years.

“I avoid writing freehand. I design my PowerPoint slides in advance and double-check the spelling before presenting to my students, ” he said.

Part of his work involves supervising PhD students who are doing research on autism.

“That’s where my strength lies. I empathise with the subject of study more than a regular researcher, ” he said.

When asked to comment on the Malaysian special education system, Logendra pointed out two areas of improvement: awareness and accessibility.

“If the government can support these two things, more people will be saved. Having access to special education is saving people’s lives, ” he said.

Drawing an analogy between building an aircraft and supporting special education, he said more effort is needed to raise public awareness and train early childhood teachers.

“If you build an aeroplane, you put in more power and technology than it really needs. If one engine fails, others will take over.

“Likewise, in the education system, we need to emphasise redundancy. The first point of contact who can help are early childhood schoolteachers. They must be aware of the symptoms so they can step in and play the role where parents are not, ” he explained.

Citing special schools and classrooms as being “sporadically scattered”, Logendra said every district must have one such school, and a group of experts with whom parents can consult.

In addition, he recommended that online assessment tools in different languages be put in place to ensure greater accessibility.

“The first thing is diagnosis. There is no point having a centre but parents have no way to diagnose their children, ” he said.

A beneficiary of technology, Logendra firmly believes that learning to live in a digital environment is essential for the future of the special needs community.

“Although many autistic or dyslexic kids dislike online learning, certain elements must at least be there, so that 10 to 15 years from now, they should be able to use Zoom, Waze and Google Maps, ” he said.

Looking back on his journey, Logendra is grateful for how well his life has turned out.

“I don’t see dyslexia as a handicap. I see it as a challenge to overcome and I keep finding solutions to the problems I face.” 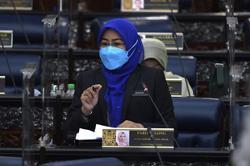