THANKS to a series of recent flash floods, Klang Valley folk have become a paranoid lot who dread the sound of thunder.

Their anger and frustration are rising with the floodwaters and, of course, with the number of hours wasted in the resulting traffic jams.

Many cannot help but doubt the relevance of all the flood mitigation projects in place, especially the much-publicised RM1.9bil Stormwater Management and Road Tunnel (Smart) that seems unable to put an end to flood woes in Kuala Lumpur. 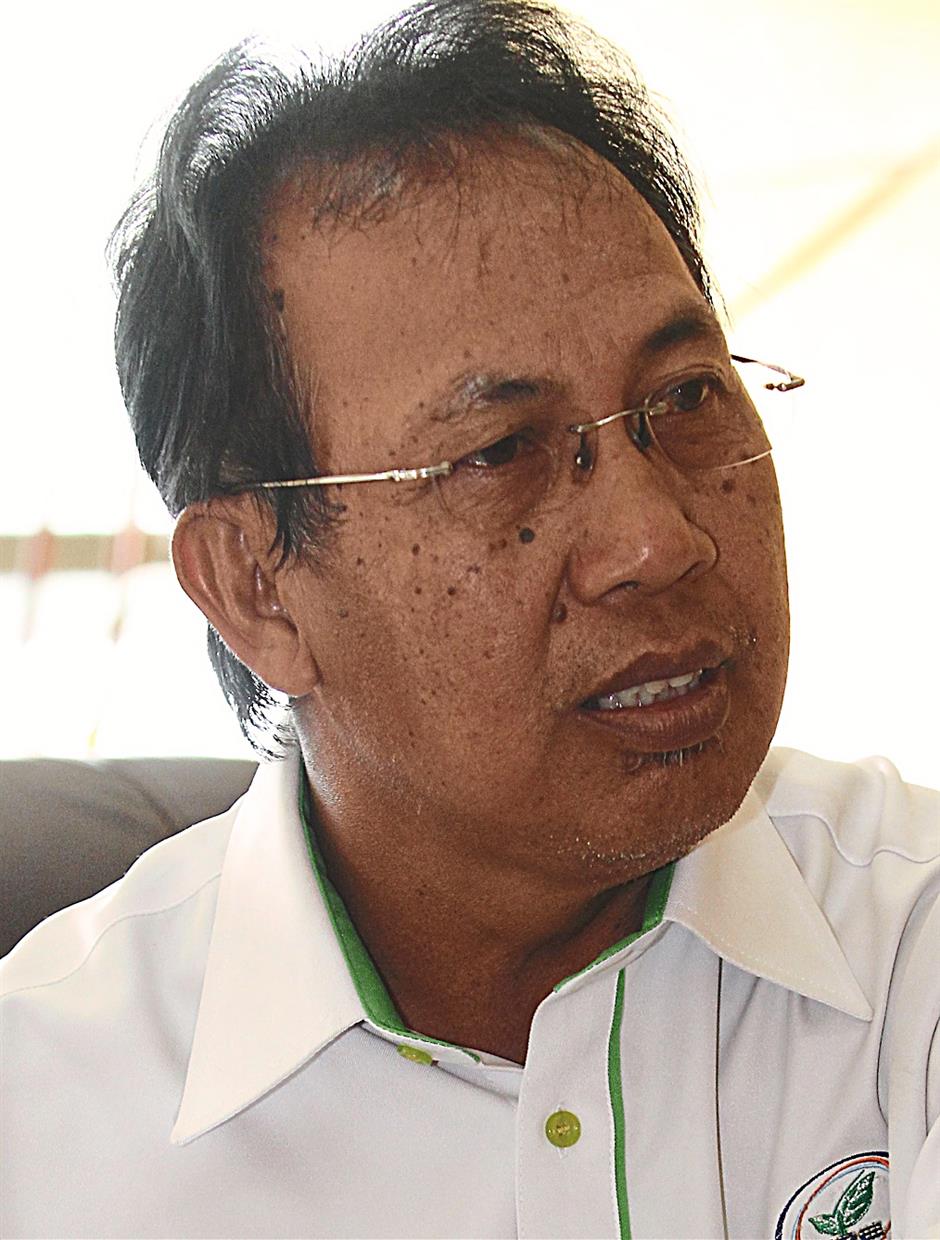 Old system not an issue: Ahmad Hus aini says unusually intense rainfall and possibly clogged drains were the causes of the recent series of flash floods.

Drainage and Irrigation Department Malaysia (DID) director-general Datuk Ahmad Husaini Sulaiman, however, explained that the recent floods were not related to the operations of the Smart Tunnel, but were localised and possibly caused by clogged drains.

According to Ahmad Husaini, there are two types of floods in Kuala Lumpur and in most urban areas — river flooding and flash floods.

River flooding occurs when a river is unable to support the extra discharge during a downpour, thus overflowing or its water level rises so high that it is impossible for water from the drains to flow in.

On the other hand, flash floods are localised and are related to an area’s internal drainage. 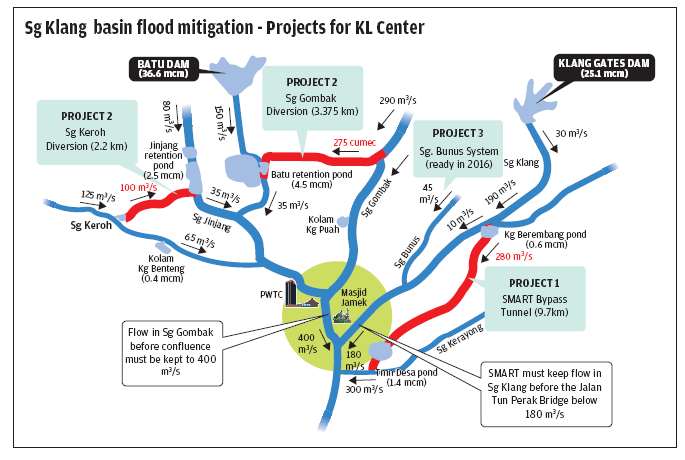 “Before the Smart Tunnel was built, most floods in Kuala Lumpur were related to Sungai Klang and the floodwaters took a long time to recede,” he said during an interview with StarMetro in his office in Kuala Lumpur.

“The Smart Tunnel was built to address the issue of river flooding by diverting extra water from Sungai Klang (refer to graphic),” he explained.

Apart from the Smart Tunnel, the Batu-Jinjang system, costing RM548mil, also helps prevent river flooding in Kuala Lumpur or the Klang River basin. This system has been operational since 2009.

This system diverts the extra water from Sungai Gombak and Sungai Keroh into the Batu and Jinjang retention ponds. The water is released back into the river when the rain stops (refer to graphic).

There is a third system — two retention ponds in Air Panas and Setapak Jaya to control the amount of water flowing into Sungai Bunus, which is also being upgraded (refer to graphic). Construction of the RM160mil system began last year and is expected to be completed by 2016.

Besides the possibility of clogged drains, Husaini said unusually intense rainfall was the cause of the recent series of flash floods.

“The trend of rainfall is higher than normal, maybe because of global warming.”

Because of this, he could not identify the flooding hotspots in the Klang Valley. 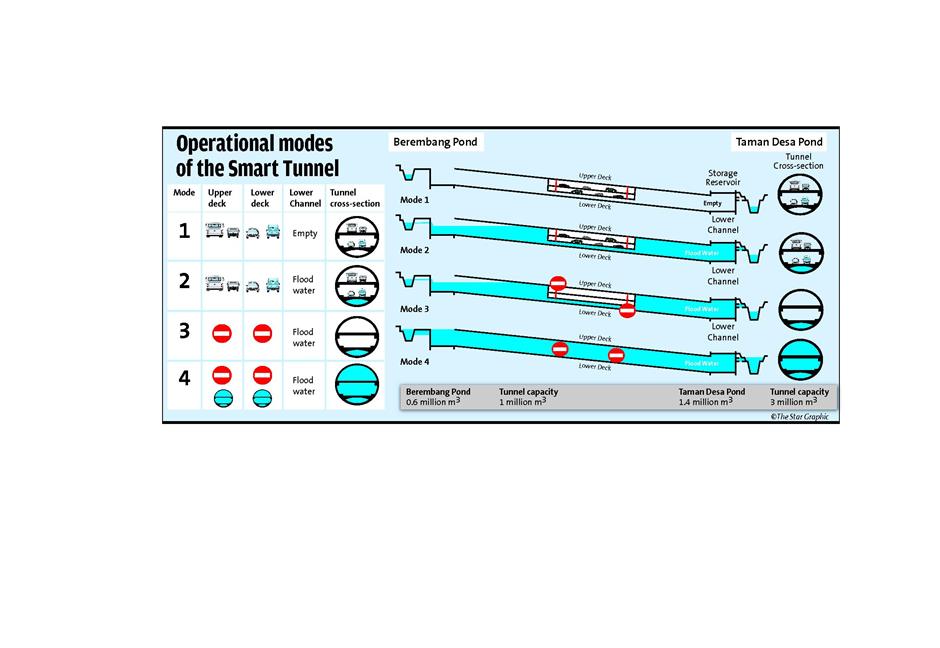 “It is difficult to tell where flash floods tend to occur, as they are all over the place because the case now depends on where the rain falls.

“This pattern of unusually intense rainfall has been occurring over the past 10 years. DID and local authorities are looking at the need to upgrade internal drainage in specific areas,” he said, adding that local authorities have also been diligently making sure that drains were not clogged.

However, he dismissed the possibility that floods happened because the internal drainage in the Klang Valley was too old to cope with the rapid development.

“I don’t think the old system is an issue, it is just a matter of maintaining it. The drainage has to be approved before a new development starts. Local councils are tasked to ensure the drainage can support a new development and they sometimes approach DID before giving approval,” he said.

He denied that there was negligence on the part of the local authorities in handling and preventing floods.

“The local councils are fully aware of the problem, but it is a matter of having the capacity to tackle it. There are times when DID comes in to help, such as upgrading the drainage in Kajang and Ampang, as well as deepening Sungai Ampang a few years ago,” Husaini said.

Many Klang Valley residents have blamed the MRT construction works as a possible contributor to the frequent flash floods of late but Husaini begged to differ.

“Floods were happening even before the MRT construction began and I do not think it is fair to point fingers at that,” he said.

On future flood mitigation plans, Husaini said it would be an ongoing process.

“If there are issues to be addressed, we will look into them,” he said.

All in all, Husaini feels that the habit of not littering is of paramount importance to keep the city free from floods. Unfortunately, drains, rivers and their tributaries are often choked with rubbish.

“Public awareness is essential, and we are improving on that through the River of Life outreach programme, which has received encouraging response so far,” he said. 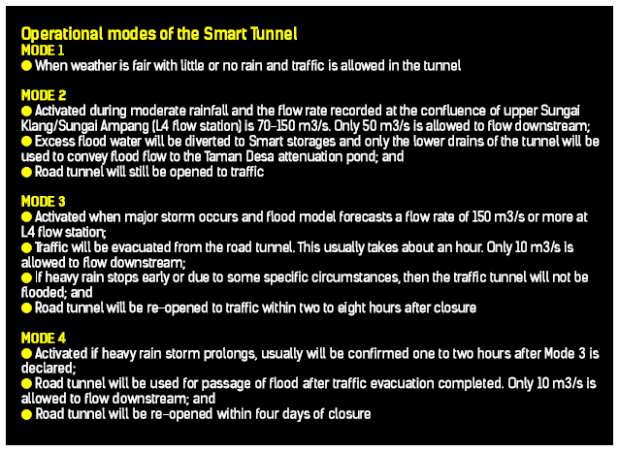 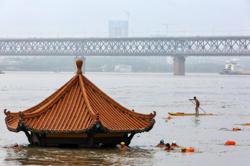 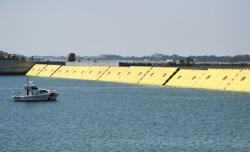