Burning passion for a magical game of Quidditch

RAIN or shine, the Damansara Dementors — a Klang Valley-based Muggle Quidditch team — are as dedicated to their game as their magical counterparts in the sport made famous in the Harry Potter series.

The Damansara Dementors — a name inspired by the Dark creature that feeds off human happiness — was founded by Charmaine Goh and Andrew Kasimir, who got to know about Quidditch while studying in Australia.

Kasimir played for the Murdoch Mandrakes and Perth Phoenixes — the Quidditch teams for his alma mater, Murdoch University in Perth, and the Western Australian Quidditch Association, respectively.

“I found it easy enough to understand the rules despite having not read or watched the Harry Potter movies then,” said the 23-year-old writer.

“I decided to form a team to continue my passion for Quidditch and spread the word about the sport after returning to Malaysia.”

“Muggle Quidditch observes rules that are similar to the sport in the Harry Potter world, although there is no flying involved. 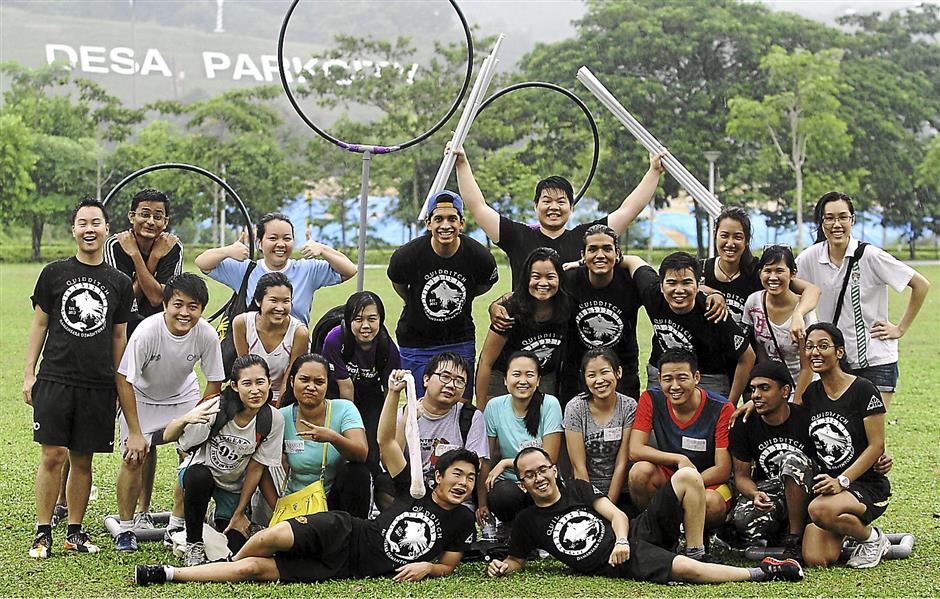 All in the name of fun: The Damansara Dementors (in black T-shirt) posing for a group photo with members of the public who had signed up to learn the game of Quidditch. Also seen here are Kasimir (middle row, third from right) and Goh (middle row, fourth from right).

“Besides not dismounting from their broomsticks, another rule is there must be a mixed team, with at least two persons of the opposite gender in a team,” Kasimir said.

There are seven players on each team — three Chasers, two Beaters, one Keeper and one Seeker. The game features three different balls — Quaffle, Bludger and Snitch.

Chasers run after the Quaffle and score points by throwing the Quaffle through one of the opponent’s goals (hoops).

Like football goalkeepers, Keepers protect the goal and try to block attempts to score by the opposing team. A game only ends when a Seeker catches the Snitch.

As there is no magic or flying involved, the Snitch in Muggle Quidditch is a tennis ball stuffed in a sock tucked in the waistband of a neutral player who plays the Snitch runner — who has the freedom to run beyond the playing field until he is caught. 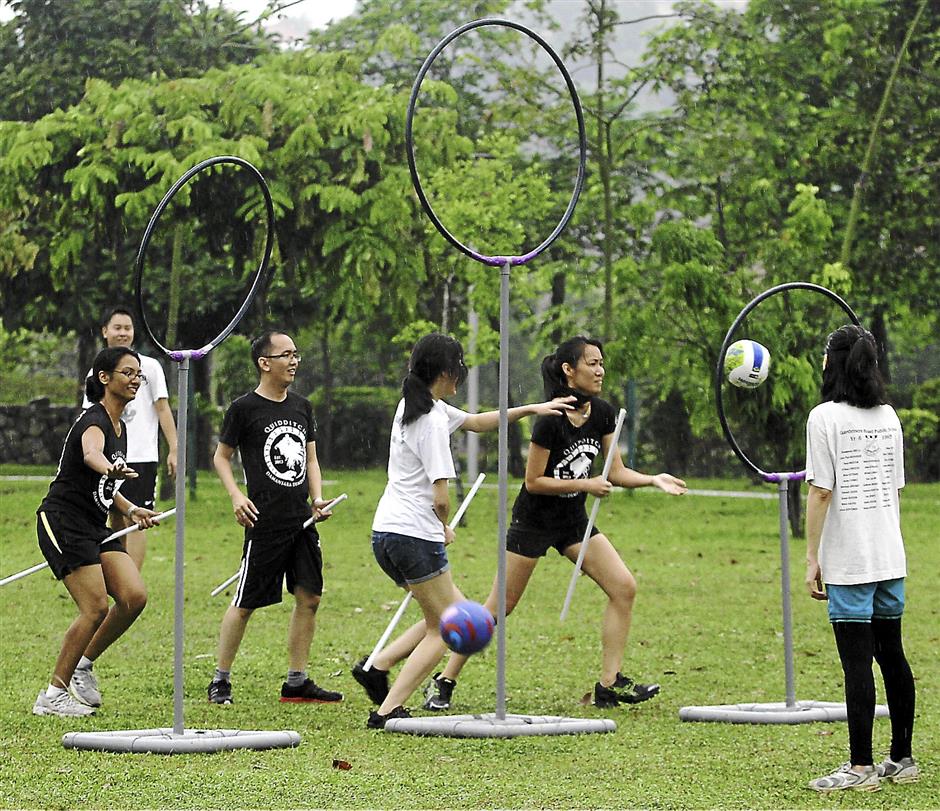 Good camaraderi e: The Damansara Dementors (in black T-shirt) playing a friendly game with members of the public who had signed up to learn the game of Quidditch via the CultureRun community learning portal.

Kasimir spent RM500 to purchase the PVC pipes, duct tape and glue needed to fashion the six hoops and broomsticks, as well as acquire the five balls, required for the sport.

The first Muggle Quidditch game was played in 2005 at Middlebury College in Vermont, the United States.

The International Quidditch Association serves as the main governing body for Quidditch.

It has been organising a yearly International Quidditch Association World Cup since 2007 in the US, and even held an Olympic Games match last year. Ouch!: Bruises, sprains and even broken ribs are quite common in Quidditch.

“When people ask what is the point of balancing a broomstick between their legs, we explain that it serves as a ‘handicap’.

“Without this ‘handicap’, it will just be like any other ball game,” said Goh.

“The players must stay mounted on their broomstick throughout the game, unless they have been hit with a Bludger, in which case the player needs to dismount and return to the hoops (or home base).”

A Quidditch player needs good stamina, agility and aim, while strategy is important for the entire team.

“Strategy is essential — for players to fulfil their role as Chaser, Beater or Seeker, and to play together as a team to score points yet avoid getting hit.

“The offence and defence have to work together, as you have to look out for your own team and overcome your opponent at the same time,” said Goh, 25.

The psychology graduate enjoys Quidditch for the teamwork, strategy-planning and camaraderie.

Kasimir likes Quidditch for the opportunity to socialise and work out.

“It’s a good way to get those who don’t play sports to have some fun, and serves as a platform to meet new people,” he said.

“Quidditch is fun because it doesn’t discriminate based on gender or age. However, it is a very rough game, as bruises, sprains and even broken ribs are quite common.”

Kasimir prefers the Chaser role, while Goh enjoys playing the Beater, though Kasimir said the person who plays the Snitch tends to steal the limelight with their outrageous antics.

“I hope that there will be more Quidditch teams to play with, as, to our knowledge, the Damansara Dementors is the only Malaysian Quidditch team.

“I also hope to recruit more members to play an exhibition match, or even form a solid team to take on the Murdoch Mandrakes and Perth Phoenixes,” said Kasimir.

The Damansara Dementors gather on alternate Sundays to play Quidditch, either at the previous training ground in Central Park, Bandar Utama, or at the new site in Medan Athinahapan, Taman Tun Dr Ismail in Kaual Lumpur.