IT was a just short-lived illusory happiness. The so-called sound barrier that the residents of Taman Megah Mas in Petaling Jaya thought would alleviate their deafening woes turns out to be a dream transformed into a nightmare.

The residents living along Jalan Emas 2 and 8, where the sound barrier now stands, are upset that it is not helping to reduce the noise pollution at all.

After years of waiting, the residents finally got their wish granted when the Works Ministry granted approval for a sound barrier to be built. 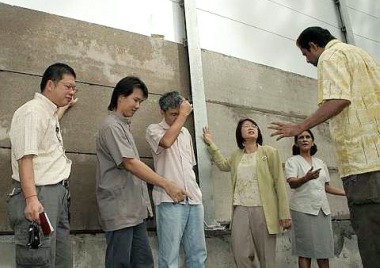 The sound barrier was completed two months ago but to the dismay of the residents, it did not help the situation at all.

Instead of reducing the noise, the sound barrier is actually amplifying the noise because of the hollow material used in building it.

“It didn’t help and the noise is even louder now than before because the material is hollow and the sound bounces back and forth,” Taman Megah Mas Residents Association president Goay Gaik Chai said.

According to Goay, the sound barrier is not high enough and the residents are hoping that highway concessionaire PLUS will upgrade it and give them a better barrier.

“PLUS has agreed to meet us to discuss on what can be done to improve the barrier.

“It makes no sense that they spent RM600,000 on a barrier like this that doesn’t even work,” said former PJ Utara MP Datin Paduka Chew Mei Fun.

Chew, who was present to inspect the barrier and to meet the residents, was credited with getting the barrier built.

The residents have been putting up with noise pollution from the nearby New Klang Valley Expressway (NKVE) since it was built.

They have previously requested for a sound barrier from PLUS but were denied the request as their houses were built about the same time as the highway.

The approval finally came after the Works Ministry stepped in.