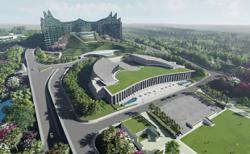 Wee (right) leading (from left) Ramasamy and Chow on a tour of the new Peel Wing. – CHAN BOON KAI/The Star

PENANG’S aspiration to be the “Medical City of Asia” has taken a step closer to becoming a reality with the opening of Island Hospital’s new Peel Wing.

With state-of-the-art infrastructure, the 12-storey facility would not only elevate standards of healthcare but also cater to the increasing demand for medical tourism.

Island Hospital chief executive officer Mark Wee said by the end of this year, the facility would have treated a cumulative total of over 1.5 million healthcare travellers.

The majority are from Indonesia. In 2019, one out of every five Indonesians who visited Malaysia for medical reasons was treated at the hospital.

“Numbers have rebounded. We now account for more than half of all healthcare travellers coming into Penang,” Wee said at the recent launch.

It leads to the upskilling of healthcare workers and support personnel, while generating immense spillover effects for the economy.

Equally beneficial is indirect spending on upstream and downstream activities such as hospitality, local services, retail and transport.

For next year, the figure was expected to exceed RM2bil, he said.

“With the commitment to quality healthcare from players like Island Hospital, Penang is fast gaining recognition as a leading medical destination on par with others in the region.

“We have long been renowned for our hospitality and food. But now our healthcare services and expertise is another attraction,” he said.

Chow said having such facilities in the state would also lure back young medical professionals who left for opportunities elsewhere.

Regaining this lost talent would have positive effects across various industries.

Combined with 300 in the existing block, renamed the Macalister Wing, Island is the state’s first 600-bed private hospital.

“The expansion gives us the infrastructure and expertise to provide a full range of medical and surgical patient services from health screening to cutting-edge oncological therapies, advanced minimally invasive general and cardiothoracic surgery, robotic-assisted surgeries and AI-guided rehabilitation,” Wee continued.

Island is the only hospital in the northern region to provide renal transplants.

Both wings are connected via a 120m air-conditioned underpass walkway. There is also a parking block with 800 bays.

To mark the Peel Wing’s opening, the hospital will run a series of community workshops and programmes. 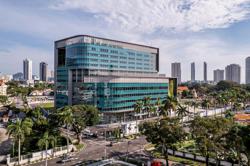