Dining with danger: Customers dining on the edge of a steep slope at what has become a new lookout point in Bukit Ampang, Selangor. — MUHAMAD SHAHRIL ROSLI/The Star

PRECARIOUSLY placed tables and chairs, dangerous parking spots and the lack of facilities are no deterrents to the hordes of customers who choose to dine at illegal roadside stalls in Bukit Ampang, Selangor.

Numerous attempts by the authorities over the past several years, including legal action, have failed to deter operators from setting up shop at the top of a steep slope along Jalan Hulu Langat.

After one batch of operators are removed from the site, new traders are quick to take over due to demand by customers, to the dismay of the surrounding residents and Ampang Jaya Municipal Council (MPAJ).

The main draw for diners and operators is the panoramic view of Kuala Lumpur city centre at night, despite the fact they are dicing with danger.

The closure of the popular Ampang Lookout Point (ALOP) in 2012, which was 1km away, resulted in the mushrooming of these roadside stalls at the junction of Jalan Hulu Langat and Persiaran Saujana.

As such, the site has now become the “new lookout point”.

Traders told StarMetro that customers would come in droves to enjoy the Kuala Lumpur skyline.

A trader who sells noodle dishes, said it was worth having a stall there despite the constant threat of enforcement.

“Just by operating during a weekend, we can earn enough to cover the cost for an entire week’s operation elsewhere,” she said.

Another trader suggested that Persiaran Saujana be closed to traffic for several hours on weekends for visitors to enjoy the place safely.

“There are alternative ways to get to the residential areas of Taman Mulia Jaya and Taman Saujana Ampang instead of using Persiaran Saujana.

“This way, the traders can be licensed and other facilities can be set up here, such as portable toilets and parking bays,” he said.

Weekends and public holidays are the busiest time, when the stalls are set up as early as 4pm and continue operating until the wee hours of the morning.

On a Sunday night, StarMetro observed many diners, including families with children, enjoying the variety of food and drinks on offer.

At least 20 stalls were operating, selling everything from snacks and drinks to meals cooked on the spot.

Customers could be seen occupying plastic chairs and tables sitting on boards which double up as drain covers at the edge of the steep slope.

Some residents are hoping that a planned rest area not too far away will put a stop to people frequenting the illegal stalls in Bukit Ampang.

It was reported that the developer of the newly opened Sungai Besi–Ulu Kelang Elevated Expressway (SUKE) is planning to build a rest stop and facilities on 0.4ha of land near Taman Tasik Tambahan in Ampang.

It will be accessible from the highway (Sri Petaling-bound) and provide an unobstructed view of the city skyline.

Mohd Jamil said he would rather have a safe place to take in views of the city.

“I always use Jalan Hulu Langat when heading home and sometimes I will stop here for a quick meal.

“But if there is a better location with facilities, I will go there,” he said when approached by StarMetro at the site.

It had been reported that the proposed multi-storey facility was still in the design and planning stage and would take between 18 and 36 months to complete.

In the meantime, MPAJ is exploring alternative options to discourage people from trading at the Bukit Ampang spot.

MPAJ president Mohd Fauzi Mohd Yatim said they had to resort to using landscaping elements at the site to deter traders from setting up shop.

“We have placed large rocks on the side of the road where traders used to set up their stalls, and these cannot be moved. This has proven successful.

“Flowering plants and bushes were also placed at the slope but those were removed by traders.

“We don’t want to put rocks there as they can roll down the slope, which will be dangerous,” he said.

That is not to say that the authorities are not taking harsher measures, as enforcement is periodically carried out.

The latest joint operation on Aug 31 with Ampang Jaya district police headquarters resulted in seven traders having their items confiscated while 15 motorcycles were removed.

MPAJ issued compounds to six traders under the MPAJ Hawker By-law 2007 for operating without a licence, and 14 investigation papers were opened.

In 2018, the local council went on a blitz in an attempt to relocate the hawkers including continuous enforcement and legal action.

MPAJ even took eight of the hawkers to court for failing to adhere to compound notices issued. The hawkers were ordered to pay the fine.

MPAJ had also joined forces with the police to issue summonses to motorists who parked illegally by the roadside.

“We sometimes have to station enforcement officers at the site to deter traders from setting up their stalls,” said Mohd Fauzi.

“But it is not realistic to have them there every day.”

He said the municipal council would not entertain requests by traders to carry out their business at the spot legally, as the location was unsafe. 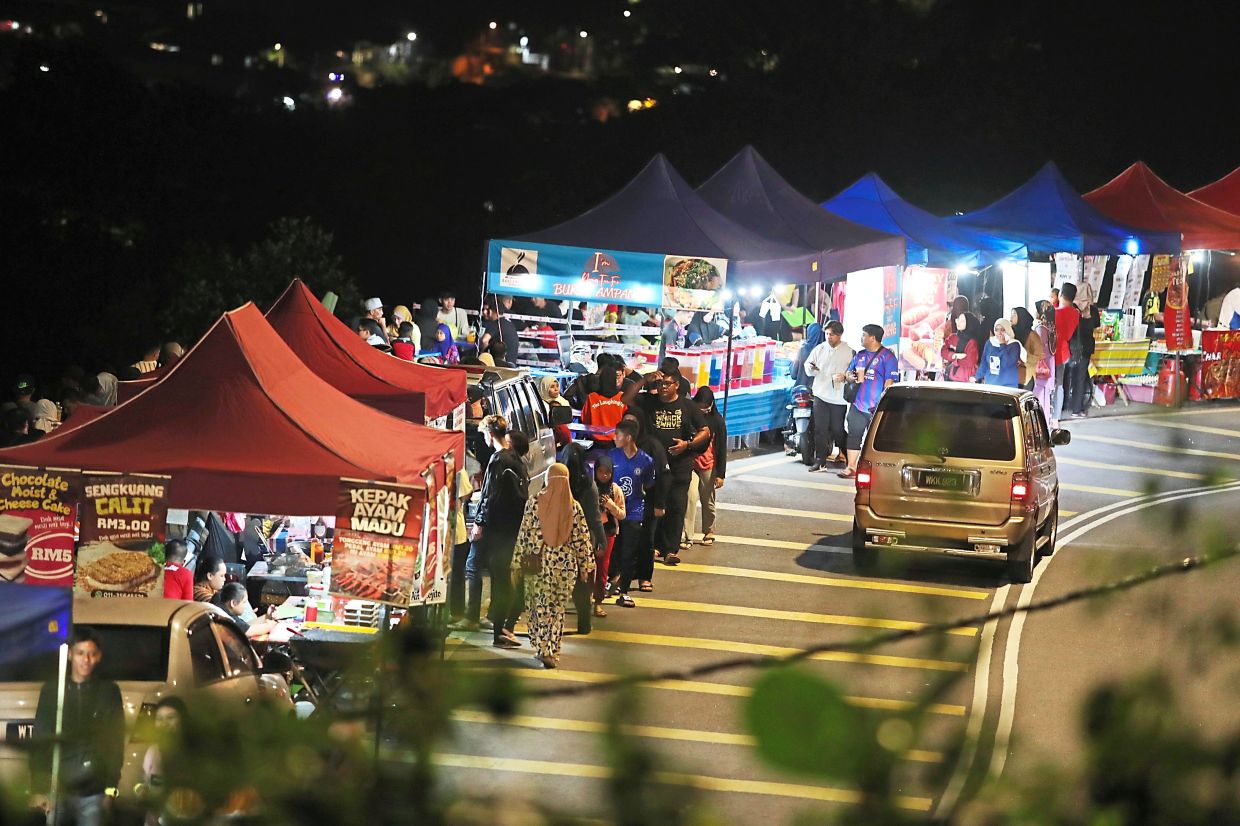 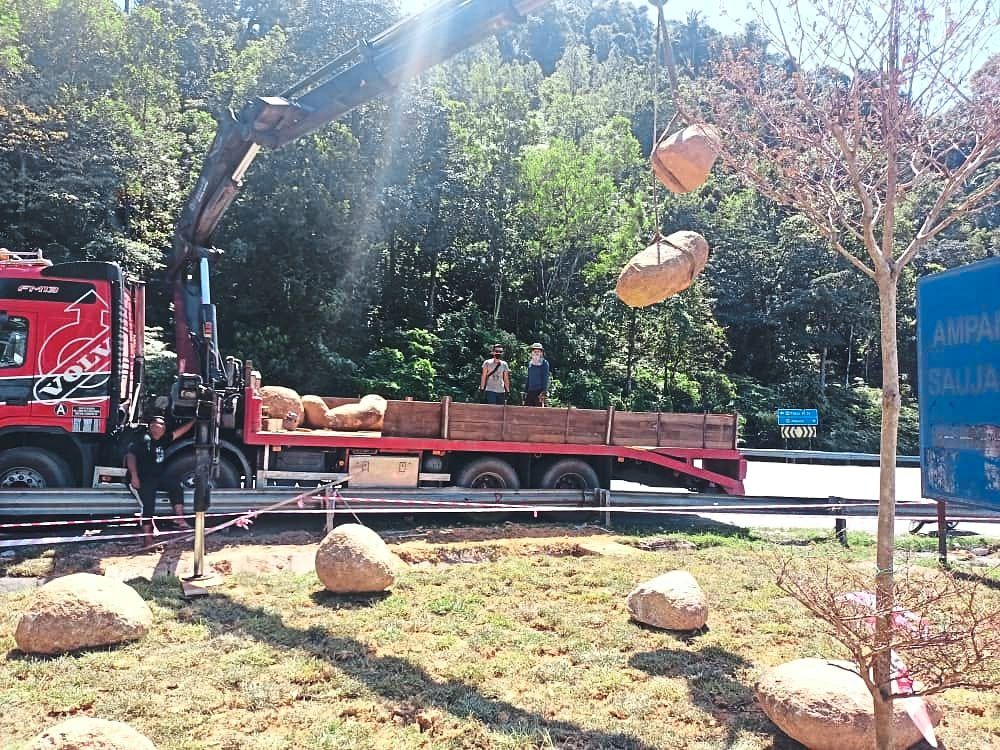 Dining with danger: Customers dining on the edge of a steep slope at what has become a new lookout point in Bukit Ampang, Selangor. — MUHAMAD SHAHRIL ROSLI/The Star

The intersection of Jalan Hulu Langat and Persiaran Saujana has become a hotspot for illegal stall operators who are willing to take the risk because of good business. — Photos: MUHAMAD SHAHRIL ROSLI/The Star

MPAJ has resorted to placing boulders near the lookout point to deter illegal roadside stalls in Bukit Ampang.

Littering is rampant at the site where illegal roadside traders operate.