JOHOR aims to be the main tourist destination in Malaysia after pulling in the most number of domestic tourists in 2021 despite restrictions during the Covid-19 pandemic.

Johor Tourism director Suhairi Hashim said the state government’s focus this year was to maintain its number one spot.

“The state government, through Johor Tourism, received great cooperation from our stakeholders who wanted to see the industry vibrant again just like before the start of the pandemic.

“However, the effects of Covid-19 can still be seen with many shops inside malls in Johor Baru still vacant.

“Hopefully with our economy recovering, these empty lots can be filled up as many tourists like to shop whenever they come to Johor,” he added.

To strengthen the state’s position as the top draw, Suhairi said the government had organised the Majestic Johor Festival between Sept 8 and 18 at Puteri Harbour in Iskandar Puteri.

The festival, he said, showcased many of Johor’s tourism products which catered to the taste of local and foreign tourists.

He elaborated that Johor’s strategic position next to Singapore was an advantage as it would attract more foreign tourists from there.

“Singapore has very limited land space and most of our foreign tourists are spillovers from across the Causeway.

“During the festival, there were visitors from European countries such as Germany, the United Kingdom and Switzerland who wanted to know more about Johor.

“We have plenty to offer, such as theme parks, resorts like Desaru, beautiful islands in Mersing and natural wonders in our national parks,” he added. — By MOHD FARHAAN SHAH 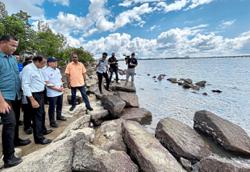