RAs: MBPJ did not follow guidelines when approving project

Residents object to the proposal to close off the right-hand turn access into Jalan BU11/1 (left side of picture) from Lebuh Bandar Utama. — FAIHAN GHANI/The Star

Residents living in the southern part of Bandar Utama claim that Petaling Jaya City Council (MBPJ) has not complied with its own guidelines in granting approval for an upcoming project in their neighbourhood.

They also claim that the traffic impact assessment (TIA) report for the 23-storey commercial development was based on inaccurate data.

The project is located along Lebuh Bandar Utama (BU) near Sprint Expressway.

It includes 500 “park and ride” bays and a pedestrian walkway linking it to an upcoming LRT3 station.

“This goes against MBPJ’s Petaling Jaya Local Plan (RTPJ) 2, Amendment 3, which states that the permitted plot ratio should be half of the maximum 1:8 for transit-oriented development.

“The TIA report submitted by the developer shows that the level of service for Junction J1 is already rated level F (worst quality) for both morning and evening traffic,” he said, adding that Junction J1 referred to the intersection connecting Lebuh Bandar Utama and Sprint Expressway.

“Apparently it was conducted during the first week of September 2019, which had a shorter work week because of public holidays.

“So it is unlikely to represent the actual traffic situation.

“We also oppose MBPJ’s proposals to close the right-hand turn into Jalan BU11/1 from Lebuh BU and instal traffic lights with U-turn at the Jalan BU11/7 and Lebuh BU junction.

“This will create a bottleneck as there are over 1,000 houses in BU11 Gembiria and Hatiria.

“There are also vehicles going to a school, kindergartens and childcare centres in BU11.”

Tan also said that the congestion on Lebuh BU was already bad presently and MBPJ’s proposals would make matters worse.

“The developer proposed having one entrance and two exits for its project to be located between Jalan BU11/1 and Junction J1.

“This might create an accident hotspot because of traffic weaving about.

“We have requested a copy of MBPJ’s traffic simulation on the affected area but have not received it even though construction has started,” he said.

He added that the RAs presented a list that highlighted traffic, security, environmental and social concerns during their briefings with MBPJ, which included zero access for construction workers and vehicles via Jalan BU11/1 during and after construction and noise pollution control measures.

Also present at the gathering with BU11 residents was Bandar Utama 12 RA chairman S. Thava Rajah, whose neighbourhood of over 500 houses would be affected as well.

StarMetro contacted MBPJ and the developer but has yet to receive a reply after several weeks. 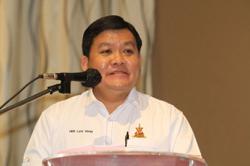