“Semenyih 2 WTP is the first automated WTP in Malaysia and uses the ORS system,” said Pengurusan Air Selangor Sdn Bhd head of operations Abas Abdullah during a media briefing at the plant located in Dengkil, Selangor.

According to him, the ORS system extracts water from a river source and serves as a method to store alternative raw water supply in ponds near the plant.

“There are three ponds linked to Semenyih 2 WTP’s ORS system.

“Its treated water is mainly distributed to Hulu Langat, Bangi, Semenyih and Beranang,” he said.

Semenyih 2 WTP started operations in March 2018 and produces an average of 100 million litres per day (MLD).

The two other plants that have the ORS system and scheduled for automation are Labohan Dagang WTP (200 MLD) and Sungai Labu WTP (105 MLD).

“A fully automated WTP requires 10 employees, compared to 23 at a regular one.

“As for the benefits of an ORS system, the water quality is generally better, it produces less residual waste and dosing level is also lower. (Dosing is adding chemicals into the water to achieve required conditioning).

“In Selangor, there are some former mining ponds that are being repurposed as ponds for the ORS system.”

He said the Sungai Rasau WTP would serve a dual purpose – as a water source and for flood mitigation.

Phase One is expected to be completed in mid-2025 and have a 700 MLD capacity, and will primarily serve the Klang district.

“It will be challenging to fully automate and apply the ORS system at other conventional plants, which use either a manual or hybrid system,” said Abas.

“Some plants have a historical incidence of odour pollution, so these still need the human touch (to address the problem),” he said, citing Sungai Selangor Phases 1, 2 and 3 WTP as examples.

“We are constantly finding ways to innovate and improve water supply and treatment services to consumers.”

One of the methods, he said, was to establish an interconnectivity system to link all its WTPs to provide alternative water sources during incidents such as pollution or unscheduled disruptions.

However, Abas said Air Selangor needed to have a water reserve margin of more than 20% at all existing WTPs before it could look at building the system.

The present water reserve margin stands at 10% to 11%. 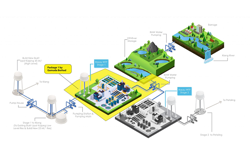