Flood mitigation works to be carried out in Taman Sungai Kapar Indah, Klang next year. - Filepic

LONG-TERM measures to address frequent flash floods in Taman Sungai Kapar Indah, Klang will be carried out next year.

Selangor infrastructure and public amenities, agriculture modernisation and agro-based industry committee chairman Izham Hashim said Klang Municipal Council (MPK) had appointed a consultant to study the issue and come up with a proposal, which was expected to be ready in January 2022.

“Once a detailed design and plan is ready, MPK will call for tenders for mitigation works,” he told the Selangor state assembly yesterday.

He was responding to a question from Mohd Fakhrulrazi Mohd Mokhtar (PH-Meru) who raised the need for a long-term solution to the flash floods in Taman Sungai Kapar Indah. Izham says some RM5.3mil has been spent since last year on road repairs along Jalan Bukit Badong, Kuala Selangor and surrounding areas.

On another matter, Izham said RM5.3mil had been spent since last year on road repairs along Jalan Bukit Badong, Kuala Selangor and the surrounding areas which were damaged badly due to heavy usage.

He explained that the Selangor Public Works Department (JKR) had used part of its allocation, as well as Malaysian Road Records Information System (Marris) funds, to repair roads that were damaged by heavy vehicles as well as for the construction of the West Coast Expressway (WCE).

“Some of the repair works were also carried out by WCE and the concessionaire for state roads Kumpulan Semesta Sdn Bhd,” he said.

He said this in response to a question from Dr Idris Ahmad (PH-Ijok) on Selangor’s effort to curtail the effects of overloaded lorries, pollution and flash floods from clogged drains.

He added that it was decided during a meeting by the Technical Committee for Monitoring and Standardisation Related to Rock and Mineral Materials in Selangor that contractors must play a part in road repairs caused by their overloaded lorries.

Meanwhile, Selangor public health, welfare, women empowerment and family committee chairman Dr Siti Mariah Mahmud said some 94% of the adult population in Selangor had at least their first dose of the Covid-19 vaccine, and not 87.8% as was announced on Monday.

She said based on updated figures from the Selangor Health Department, 4,276,563 of those aged above 18 had received their first dose of the Covid-19 vaccine out of a population of 4,551,800. 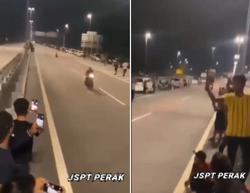