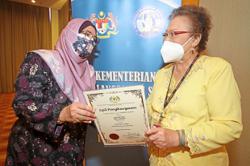 MORE than 400kg of rubbish were collected during the Malaysia Bersih Indah voluntourism programme on Pulau Jerejak, Penang.

Organised by the Tourism, Arts and Culture Ministry (Motac) Penang, the programme was held to foster the spirit of volunteerism among the local community and tourists.

A total of 80 determined volunteers spent around two hours under the hot sun to clean up the beach on Pulau Jerejak.

“I am excited to be one of the volunteers cleaning up the beach.

“It is indeed an eye-opening experience.

“I hope visitors to the island can be more responsible and clear away their rubbish.

“We have to protect our islands so that our future generations get to enjoy them,” he said.

Tourist guide P.H. Yeap, 71, used to volunteer to clean the Teluk Bahang beach but it was his first time cleaning the beach at Pulau Jerejak.

“I am happy I can do my part in saving the environment.

“We found rubbish left behind by irresponsible picnickers.

“They should clean up the area before they leave.

“It will take more than 100 years for their food containers to decompose and this will affect marine life,” he said.

PTGA president Chin Poh Chin said it was her first visit to this part of Pulau Jerejak.

“I used to bring tourists to the resort on the other side of Pulau Jerejak.

“We were shocked today to find helmets, plastic bottles, polystyrene boxes and other items washed ashore at the beach.

“I hope that people will be more considerate and do their part to protect the environment,” she said.

Chin added that 15 PTGA members volunteered for the programme.

“Pulau Jerejak is a potential destination for eco-tourism,” she said.

“We held similar programmes prior to the Covid-19 pandemic.

“Pulau Jerejak, which has several well-known landmarks, can be a tourist destination.

“We have a clean and nice beach here where tourists can have their picnics.

“Tourists can approach travel agents for available packages to visit the island.

“When the international borders are reopened, tourism players can consider offering sunset dining on boats here,

“They can enjoy the views while having dinner,” said Freddy.

Besides voluntourism, the programme featured the concept of volunsharing.

This involved participants sharing on social media their volunteering experiences at tourist spots in efforts to promote the destinations.

“We hope this programme can help promote eco-tourism and highlight the unique selling points of Pulau Jerejak,” said Freddy.

Located between George Town and Seberang Prai, the island once housed a prison, a leper colony and a tuberculosis hospital

The Pulau Jerejak maximum security prison began operating in 1969 and closed in August 1993.

Only three blocks of the prison out of the original 23 remain today. Arif (middle) and his colleagues finding an old tyre at the beach.

Yeap says it will take 100 years for food containers to decompose and this will affect marine life.

Chin says they were shocked to find helmets and plastic bottles washed ashore.

Volunteers leaving no stone unturned in their hunt for litter.