Ayub: Silt and sand contribute to flooding problem as drains become shallower and make it difficult for water to flow.

He said flooding in the district was due to downpours coinciding with high tides.

“The existing drainage along main roads near Sungai Batu Pahat cannot accommodate the amount of water from connecting drains.

“Silt and sand also contribute to the problem, causing drains to become shallow and make it difficult for water to flow,” he said, noting that it was normal to see sand-filled roads once floodwaters recede.

He said this in reply to Gan Peck Cheng (PH-Penggaram) at the state assembly at Bangunan Sultan Ismail in Kota Iskandar, Iskandar Puteri, when asked on actions taken to address flash floods in Batu Pahat.

Ayub said the Drainage and Irrigation Department (DID) had identified projects to reduce water overflow impact in Batu Pahat and Pontian.

He said Batu Pahat DID had submitted a development application to clean up Sungai Batu Pahat that would cost RM4mil.

He added that this would help reduce flood risks in areas near Sungai Batu Pahat and Taman Batu Pahat.

The project would be opened for tenders in early 2022, said Ayub.

“DID also has a two-phase project to upgrade Batu Pahat’s drainage system in Sungai Suloh and Peserai areas to reduce flooding.

“The cost for both phases is RM32mil.

“Under phase one, the work in Peserai will cost about RM7.7mil and approximately RM3.5mil in Sungai Suloh,” he said, adding that the rest of the amount was for phase two.

Ayub said phase two of the Sungai Suloh project, involving three areas, was still at the design stage and tender process would start in the fourth quarter of 2022.

He elaborated that as a short-term measure, a contractor had been engaged to remove sand and silt twice a year from drains.

He said temporary signage and diversion route information would be placed for road users when cleaning works take place.

“For the long-term, Public Works Department (JKR) along with district agencies will liaise with private land owners to prevent sand from their land going into drains.

“JKR also applied for a RM2.5mil allocation to upgrade sewers and drains on May 30.

“If the requested allocation is approved, then drainage upgrade works will take place immediately,” he said.

Ayub added that Batu Pahat Municipal Council, too, had carried out work to maintain and upgrade existing drains in Taman Batu Pahat, amounting to RM738,000. 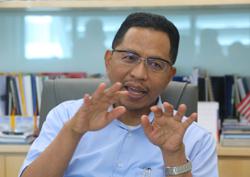