The overhead bridge was meant for both pedestrians and motorcyclists but the access to get to the pedestrian side was closed.

RESIDENTS of 1Razak Mansion located in Jalan Razak Mansion, Kuala Lumpur are dicing with danger daily as they are forced to use a motorcycle ramp when going to the nearest bus stop and Salak South LRT station in Jalan 4/108a.

They have to use the motorcycle ramp leading to an overhead bridge because the pedestrian lane is inaccessible.

The pathway leading to the overhead bridge staircase is blocked by construction barrier walls.

This happened ever since the 500m access pathway — which residents were using — was closed by the landowner last month.

The overhead bridge allows pedestrians and motorcyclists to go to and come from Jalan Razak Mansion and Jalan Sungai Besi.Some 70% of those living in the area are senior citizens aged 60 years and above.

Wong Lai Pian, 65, says a prayer each time she uses the bridge because the motorcycle lane is narrow and motorcyclists ride too fast as not many are aware that pedestrians use it too.

“How can they know when I am not supposed to be on the motorcycle lane?

“But it is the only access available. The alternative road is under a bridge and it is dark. I have no intention of using it,” she added. Another resident, Annapurni Kesavan, 55, said she had to be extra careful of snatch thieves on motorbikes when using the motorcycle lane.

“They come at you fast and I am more afraid of falling over the railings as they are low and one can easily tip over,” she said. Another way for the elderly folk to get to the bus stop, on the main road, is an option located about 1km away or a 30-minute walk.

“My old legs cannot handle long distances and my meagre pension does not allow me the privilege of taking a taxi or even Grab,” said 66-year-old Siti Hairah Musa.

“Moving about has been difficult and I don’t like relying on family members to drive me around.

“All I ask is a proper and safe pedestrian walkway for those who are poor and old like me,” she added.

“One would expect the authorities to inform us about the closure of the access walkway, but no one did so and pedestrians are put at risk every day when walking on the motorcycle lane.

“Are they going to react only when someone gets hurt?” he asked.

Tan said the initial walkway for pedestrians was closed in April 2019 at the start of the construction for Razak City Residences, which comprises several blocks of 5,000 residential units and over 100 shoplots.

The project developer put up a signboard informing stakeholders that the private road would be temporarily closed to the public from March 1, 2019 to March 1, 2022 to facilitate construction works.

“Residents held a peaceful demonstration to protest against the road closure.

“I remember DBKL’s Planning Department director Sulaiman Mohamed saying that the decision to close the road was made for the community’s safety and to facilitate the construction of the project next door,” Tan said.

After the protest, the then Kuala Lumpur mayor Datuk Nor Hisham Ahmad Dahlan visited the site with Bukit Bintang MP Fong Kui Lun and asked the developer to meet the residents to come up with a win-win solution, he said.

Following the mayor’s instruction, a new access road leading to the main road bus stop and LRT station was built.

This road, however, was illegally built on Education Ministry land. This too has been closed, forcing residents to use the motorcycle lane to gain access to the pedestrian part of the overhead bridge.

“Now the residents are constantly in danger every time they use the motorcycle lane and I wonder why no one is concerned about it,” Tan said.

Food Panda rider Ahmad Arifin, who uses the bridge, said there were times when he almost knocked down a pedestrian as he was in a rush.

“I have to be extra careful when I am on that bridge because pedestrians use the motorcycle lane too and we have to look out for them.

“I hope the authorities will act fast before someone gets hurt,” Ahmad said.

Another motorcyclist Anbu Raj, who uses the bridge to get to work each morning, said peak hours were the worst.

“More motorcyclists and pedestrians use the bridge during peak hours and there have been many altercations,” he said.

Attempts to get Sulaiman’s response on the matter has been unsuccessful. 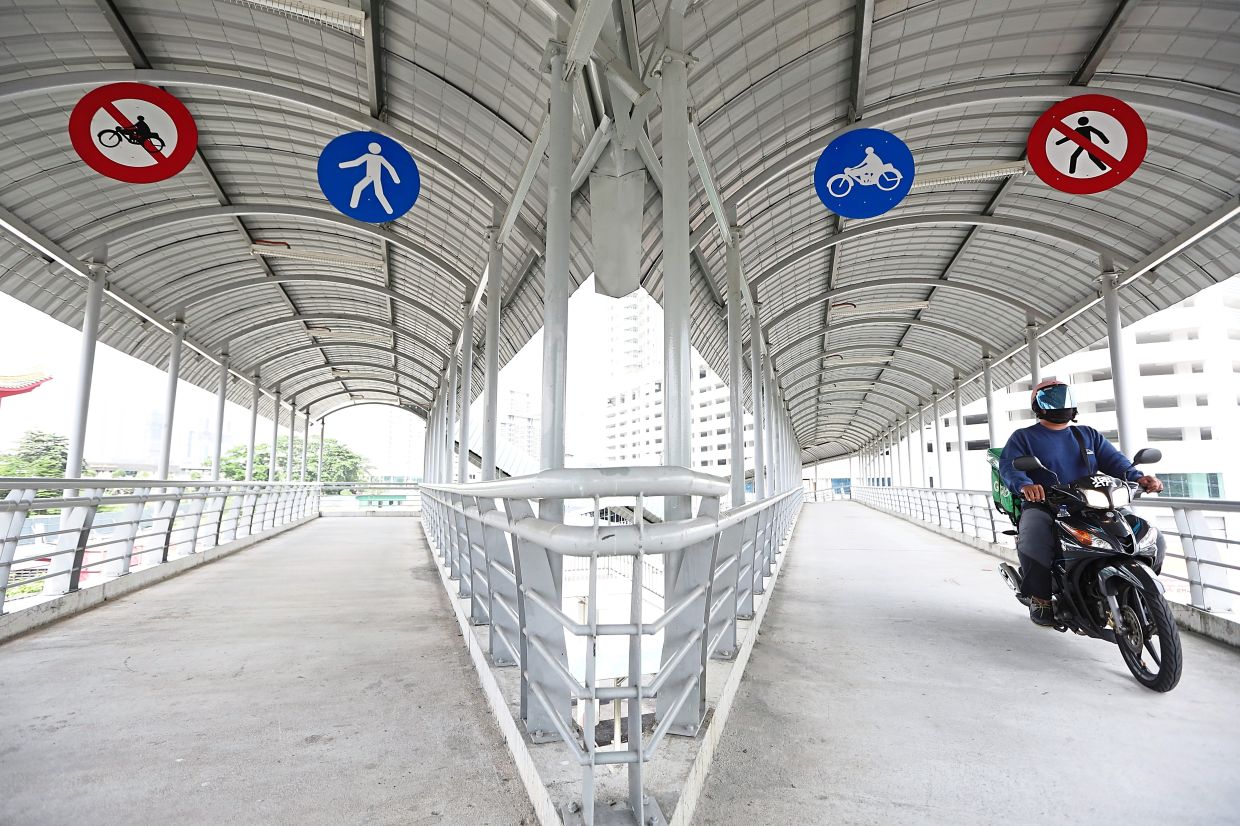 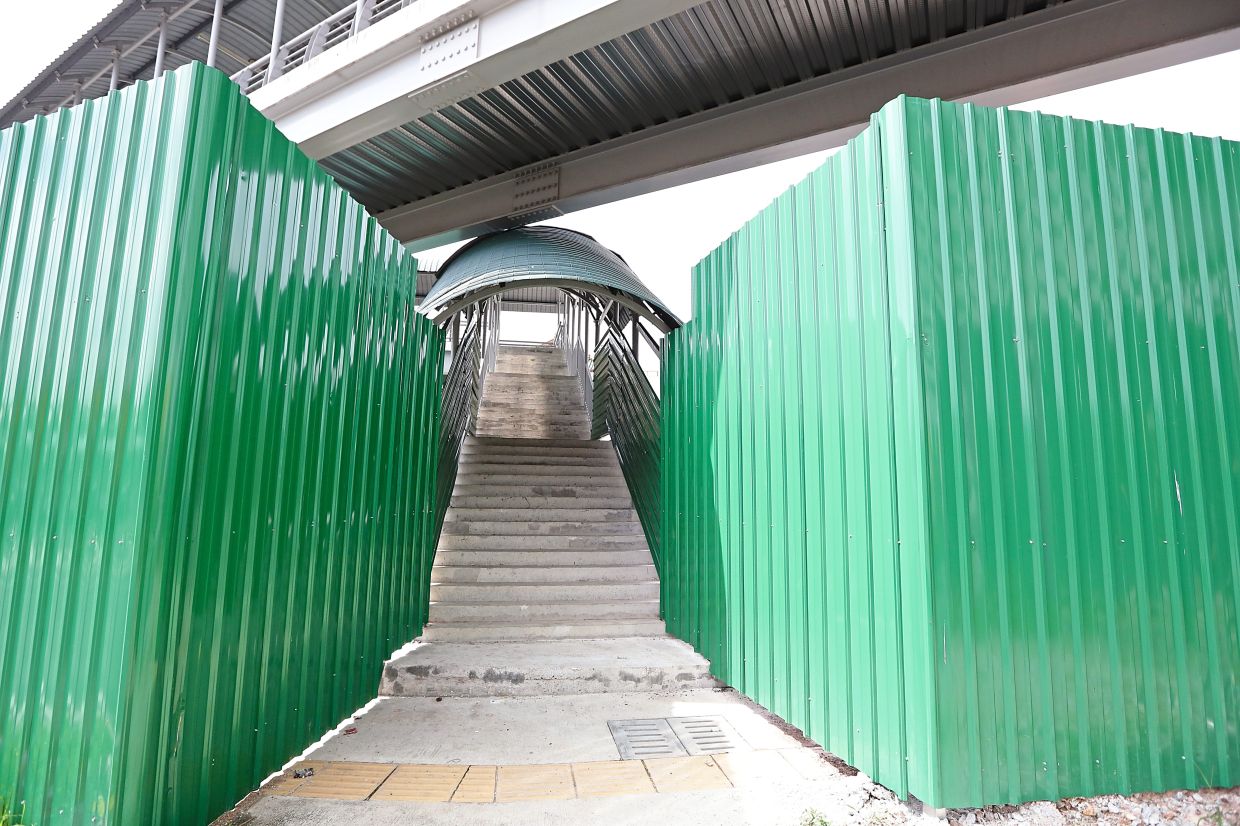 The overhead bridge was meant for both pedestrians and motorcyclists but the access to get to the pedestrian side was closed.

Many elderly residents risk their lives walking along the motorcycle lane to get to the pedestrian side of the overhead bridge. — Photos: YAP CHEE HONG and LOW LAY PHON/The Star

The overhead bridge for both pedestrians and motorcyclists was built to allow them to travel to and from Jalan Razak Mansion and Jalan Sungai Besi.

Tan showing the alternative dingy lane under the overhead bridge that some residents were forced to use to get to the bus stop on the main road.

The walkway on the main road was closed to pedestrian due to a construction project.

A signboard put up by the developer informing residents of the road closure.