Roads have been retarred and the faded road markings repainted at Prima Setapak, Kuala Lumpur.

DRAINAGE and road upgrading works in the commercial area of Prima Setapak in Setapak, Kuala Lumpur have finally been completed, much to the relief of business owners there.

Illegal structures built by irresponsible shopowners in the back lanes had also impeded the cleaning of drains.

These structures have now been removed as part of the upgrading works carried out by Kuala Lumpur City Hall (DBKL) contractors.

“Drain would overflow into the restaurant whenever there was a downpour.

“We used to have to close our shop to clean the mess up.

“However, with the upgrading works over these nine months, we have seen plenty of improvement and flash flood incidents have reduced.”

Prima Setapak Flat resident Chong Meng Teck said Jalan Prima Setapak 6, which is located in the front of the apartment, had never been upgraded before.

“The recent resurfacing of the road and the newly painted markings are benefiting both residents and motorists.”

Andre Lai, who is special assistant to Wangsa Maju MP Datin Paduka Dr Tan Yee Kew, said they had monitored the condition of roads and drainage at the commercial area and pushed for the upgrades after numerous complaints from locals.

“Prima Setapak is the main commercial area along Jalan Genting Klang and is surrounded by several residential areas.

“The stakeholders had reached out to us about the frequent flash floods and we approached DBKL,” he said.

Lai also hoped that two sewerage upgrading projects in Prima Setapak by the Sewerage Services Department would be completed soon.

“The projects started six years ago and are still ongoing.

“They are taking up a huge part of the road in Prima Setapak, with white and red barricades surrounding the project sites.

“These projects are causing traffic congestion, especially in the mornings,” he said. 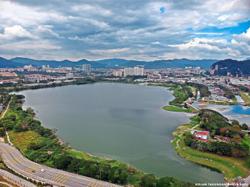