Rasengeran, who looks for scraps to resell that earns him a meagre sum, says his family relies on free meal packs to survive.

FOR many, a food pack can be consumed in one sitting but for the less privileged, it is not unusual to portion it out to last the whole day.

Handyman S. Rasengeran, 56, from Johor Baru, is doing just that after finding it particularly tough to get by since Phase One of the National Recovery Plan came into effect.

“My income has dipped badly as there are no jobs available these days and I can only go around on my motorcycle looking for scraps to resell and earn a meagre sum.

“My wife recently lost her job at a factory near our house in Taman Johor Jaya and we are paying the rent and bills with what is left of our savings.

“We do not want our children to end up on the street,” he told StarMetro.

“I have been taking free meals here after my friend told me about it.

“Each person is allowed to take up to four packets and my family will usually portion the food to last us through lunch and dinner,” said Rasengeran.

Senior citizen Tam Mou Lin, 63, who has difficulty walking due to injuries to her right leg, said she was forced to leave her house in Flat Ros Merah to queue for free food to save money.

“It takes me about 15 minutes to walk from the fourth floor of my flat just to head out to collect the meal packs.

“I do not want to burden my four sons by asking them for help. They have their own troubles and families to feed.

“I previously received some basic food parcels from non-governmental organisations but decided to keep them for future use so I will not starve in case there are no more free meals given out,” she said.

A construction worker, who only wanted to be known as Hassan, 38, has been jobless for the past two months and relies on food banks and free meals to get by.

“Luckily, I live on my own and can survive with the bare minimum. I hope the economy improves soon so I can get a job and have better living conditions,” he said.

Meanwhile, Liow said she had given out some 15,000 meal packs to people since July 8.

The long queues start forming before 11.30am daily and she has six to eight volunteers assisting her, including ensuring that recipients adhere to the standard operating procedures.

“We started by giving out 130 food packs daily.

“This gradually increased to about 790 to 800 packs each day, as more people came to know about our initiative.

“The recipients are mostly senior citizens. The others comprise the disabled, unemployed and some foreign workers,” she said, adding that the food aid would end on July 31. Liow plans to provide free meals in targeted areas next.

She said the initiative began when a restaurant owner, who wanted to sponsor meals for the needy, reached out to her.

“After word got out, more and more food business operators started approaching me to contribute.

“Some generous individuals even took the effort to make kuih and treats as add-ons to the meal packs.

“Some also contributed fresh vegetables and fruits so those who show up for free hot meals can take the produce home for their next meal.

“Although Covid-19 has resulted in many negative aspects, it has also brought out the generosity in people.

“I am glad that I can provide a platform for people to receive assistance and for others to offer help,” she added. Rasengeran, who looks for scraps to resell that earns him a meagre sum, says his family relies on free meal packs to survive.

Liow (right) handing out free food to the needy at her service centre in Taman Johor Jaya, Johor Baru.

Tam has difficulty walking but needs to go out to get free food near her home in Ros Merah Flats, Johor Baru. 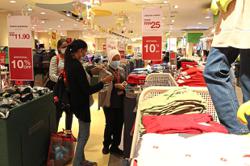 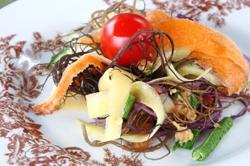