IN envisioning Putrajaya as the city of choice for cyclists, the Federal Territories Ministry rolled out a pilot project late last year.

The project involves an 18km stretch, marked with blue dashed lines on the extreme left lane of several roads in the administrative capital, including Persiaran Timur, Persiaran Utara and Lebuh Sentosa.

The bicycle lanes were supposed to undergo a six-month trial period beginning mid-January this year.

However, the plan was put on hold when the movement control order due to the Covid-19 pandemic was implemented again, and cycling was not allowed.

The trial period is thus expected to be extended to the end of this year, and will be finalised only in the third quarter of 2022. Muhammad Azmi: PjC will build a pit-stop for cyclists with parking and self-repairing facilities.

While waiting for the trial period to end, he said a task force has been set up to look into other aspects to benefit cyclists using the main roads, parks and lakeside.

“Several workshops and discussions were held with cycling associations and event organisers in the Klang Valley to ensure the planned facilities would fit the needs of the sport.

“PjC will build a pit-stop for cyclists — Pit-Stop@Anjung Floria in Precinct 4 — with a parking lot, food kiosks and self-repairing facilities in addition to other recreational offerings, namely a man-made sandy beach, remote control car race track, boating and kayaking.“Work on the pit-stop is estimated to take eight months to complete.

“The contractor has been appointed and will start work as soon as construction activities are allowed,” he said.

Muhammad Azmi said PjC was also working with Sustainable Energy Development Authority Malaysia on another bicycle lane leading to the latter’s offices in Precinct 3 to encourage people to cycle to work.

In November last year, Federal Territories Minister Tan Sri Annuar Musa announced the plan to convert underused motorcycle lanes in Putrajaya into bicycle lanes in a bid to make it a cycling-friendly city.

Putrajaya Cycling Association secretary Mohd Saiful Abdul Jalil, who is also the Malaysian National Cycling Federation vice-president, said it was high time bicycle lanes and cycling facilities were provided in the administrative capital, as its well-paved roads and central location were attracting many cyclists, including professional racers.

“It is a good initiative to provide a safer and more conducive environment for those interested in the sport.

“At the same time, much importance must be given to educating cyclists about cycling ethics and motorists about road-sharing,” he added.

Mohd Saiful said there would be two types of bicycle lanes – under-used motorcycle lanes converted into bicycle lanes, and shared lanes with other road users.

“The former will only be suitable for leisure cyclists.

“Professional or experienced cyclists use road bikes at high speed, so the curves and drops on motorcycle lane are dangerous and may cause accidents,” he said, adding that the shared lane was more suited to this group.

“This concept of ‘shared lanes’ between cyclists and motorists needs to be understood.

“These bicycle lanes take up between 1m and 1.5m of the extreme left lane and are with blue dashed lines.

“Cyclists must keep within the line and motorists must give way when cyclists are using the lane.

“When approaching junctions, proper judgement and reaction is required to avoid accidents,” he explained.

Mohd Saiful said some amateur cyclists were a nuisance as they would cycle on roads in big groups and often side by side.

Irresponsible amateurs, he added, would often take up a few lanes when roads were empty, thus riling up motorists and giving other cyclists a bad name.

“Professional cyclists always prioritise safety and keep to a single line when training on the road.

“There is always a leader who knows about the road conditions and guide the group that usually does not exceed 20 cyclists.

Mohd Saiful said more road signs were needed to indicate to people that the blue dashed lines were for shared lanes with cyclists.

“Bicycle lanes are new in Malaysia. So the authorities should educate the people about them and how they should be used,” he stressed.

Cycling enthusiast Syamsul Anuar Aminshah, who is also owner of bicycle shop Orbit Cycle, said the pandemic has encouraged many to pick up cycling.

Like running, he said cycling was one of the few sporting activities that could be done while practising physical distancing.

“This has likely pushed many who were into other kinds of sports to try out cycling in an effort to maintain fitness and remain active.

“Demand for bicycles and their spare parts increased across the globe, so much so there was a shortage in supply.

“Those in the bicycle business saw their sales triple after the MCO was imposed.

“With more people taking up this sport, the government should ensure proper facilities are provided for the safety of all cyclists,” Syamsul Anuar said. 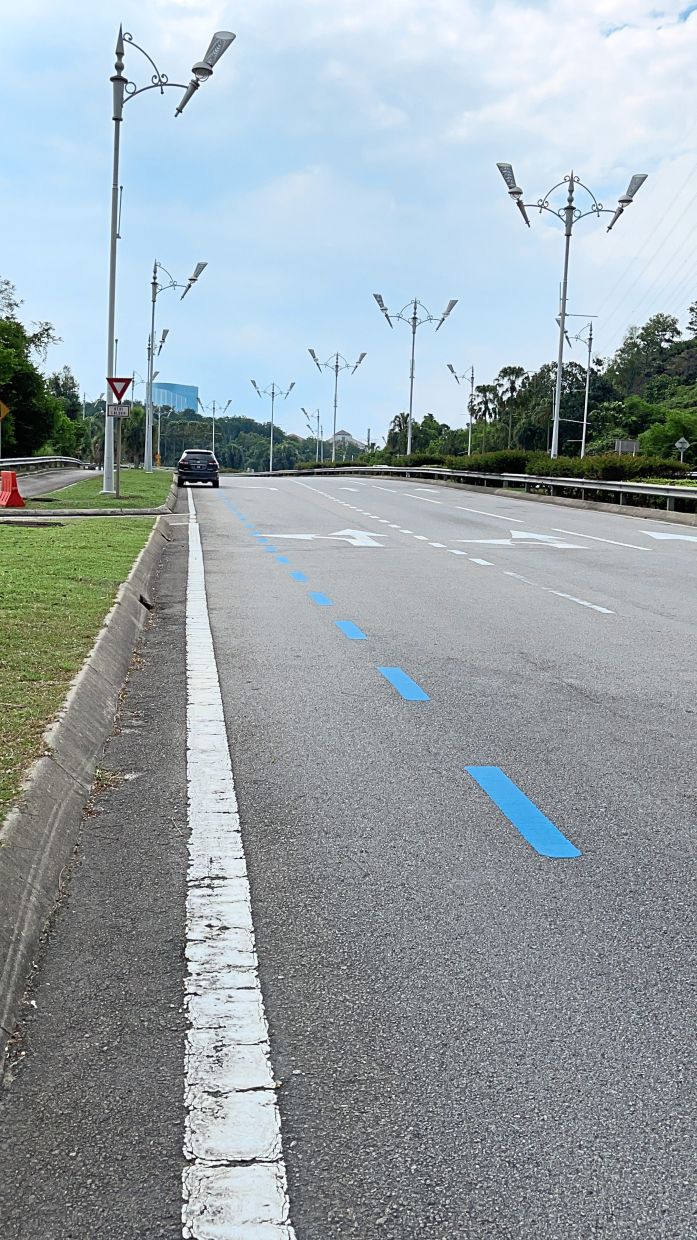 PjC staff members testing out a stretch proposed for the bicycle lane project in December last year, before the blue dashed lines were drawn.

Persiaran Timur is part of the strecth whereby the extreme left lane with blue dashed lines will be shared with cyclist.

Once cleared, cyclists will be able to use the underused motorcycle lane (left) on Persiaran Timur as well as the main road with blue dashed lines.