COASTAL fishermen yearn for the good old days when they used to land large catches.

Fisherman Kamaruzaman Haron from Kampung Melayu Gelang Patah claimed their catch started to dwindle about a decade ago due to land reclamation activities.

“Life is not easy as we have to depend on the sea for our livelihood,” he said when met at Pasar Pendekar Laut, Jeti Pak Ngah in Gelang Patah, Johor. Troubled waters: Fishermen going out to sea from Jeti Pak Ngah in Kampung Pendas Laut, Gelang Patah, Johor, say their income has been dropping for the past 10 years. — ZAZALI MUSA/The Star

“Before the reclamation projects started, I could easily get between 30kg and 40kg of prawns after spending about four hours at sea,” said Kamaruzaman.

“Now I consider myself lucky if I get a kilogramme or two. Most of the time I come back empty-handed,” he said, adding that on average, his monthly catch was about 30kg.

Kamaruzaman said he now had to go as far as Pulau Merambong, about 20km away, to fish as waters near the village are no longer rich with marine life. The mangrove swamp at Kampung Pendas Laut used to be home to many species of marine life but their number is going down.

“We also travel as far as Kukup, Pontian, about 54km from here, and even to the border of Pulau Karimun, Indonesia in the Straits of Malacca, as marine life is still bountiful at these places,” he said.

“The Straits of Malacca is very busy with many vessels and it is dangerous, especially at night, but what choice do we have?” he lamented.

Faidarus, who has been a fisherman for over 20 years, said he used to make about RM600 from 30kg of prawns. Now he earns only about RM100. Serina says there are five major coastal development projects in and around the Straits of Johor.

He said he now had to work two shifts.

The first is from 5pm to 11pm. He then goes back to rest before returning to the sea from 4am to 10am.

“It is a case of kais pagi makan pagi, kais petang makan petang for us (living from hand to mouth),” he said.

It is a different story for 27-year-old Ridhwan Yazid, who decided to quit after being a fisherman for about eight years. Kamaruzaman says fishermen travel as far as Pulau Merambong, about 20km away, to fish.

In 2019, he became a delivery rider with a courier company as he wanted to earn a steady income.

“Life as a fisherman is hard as you don’t have a fixed income like a salaried worker,” said Ridhwan, adding that his basic salary was RM1,200 and he used to get a good commission for every parcel delivered.

He said although business was good as more people were buying items online, his company slashed his commission.

Ridhwan quit three months ago and is happy to be back at sea even though his income is uncertain. Faidarus says fishing in the Straits of Malacca is dangerous but the fishermen have no choice.

Meanwhile, ISEAS-Yusof Ishak Institute in Singapore visiting fellow Dr Serina Rahman said there were five major coastal development projects in and around the Straits of Johor.

“The projects involve land reclamation and sand dredging, including clearing of mangrove plants,” she said.

Apart from development, Serina said climate change had also led to dwindling marine life as sea water in the area was becoming cooler due to changes in current and wind direction. Fishermen weighing their catch which they say has been decreasing for the past 10 years.

She said prior to land reclamation activities and clearing of mangrove trees, the area used to be home to endangered species such as dugong, green turtles and hawksbill turtles.

“Years ago, fishermen used to spot turtles that came to Pulau Merambong to lay eggs but not anymore,’’ said Serina.

She added that the areas rich in seagrass had four species of seahorses as well as saltwater or estuarine crocodiles such as buaya tembaga or buaya katak. 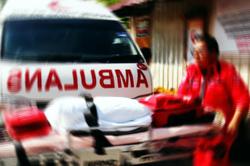