Dharma (left) collecting 28 lunch packs from Raashi Kitchen restaurant to be delivered to families and migrant workers in Puchong.

MANY poor families, low-wage migrant workers and refugees are benefitting from the free hot meals served by organisations, restaurants and Good Samaritans in Puchong, Selangor.

Lim used to sell scratch-off lottery tickets on the streets to make ends meet, but had not been able to do so since the Covid-19 pandemic began last year.

“I am not married. I live with my siblings who are also elderly. “We are all not doing well financially, so we try to cut expenses as much as we can and that is why I come here to collect free food on Sundays, ” he said.

Another senior citizen from the same neighbourhood, Phang Lum, 65, also gets food from Dapur Kinrara.

He said he had no money and was just trying to survive without burdening anyone in his family.

Former kindergarten teacher Eylen Vincent, 68, from Taman Kinrara, Puchong, goes to Dapur Kinrara to get sustenance for herself and her husband.

Her children could not help much, she said, so the couple depended on free ration from non-governmental organisations to get by.

“Things took a turn for the worse after I lost my teaching job due to the pandemic.

“My husband is 78 years old and he cannot work anymore.

“I am grateful for any help that I can get, ” she said.

SP Dharma, 63, from Puchong said he volunteered to pick up and deliver food to the poor families in his Taman Kinrara neighbourhood after learning about Raashi Kitchen’s free daily lunch effort.

“I am active in my community and know of the struggles some families face to put food on the table since the pandemic started, as many have lost their source of income.

“When I learned about the aid initiative, I volunteered to deliver food to the families because the restaurant is not too far from my neighbourhood.

“I usually pick up 18 packs and deliver to six families but recently, I added another 10 packs after finding out about a group of Indian nationals who are jobless and out of money due to the lockdown.

“They used to work at a carwash.

“I am doing my bit by offering free delivery.

“I hope more people with the ability to help will lend a hand to those in need, ” he said, adding that he was grateful for people like the owner of Raashi Kitchen.The family of warehouse attendant K. Mathan, 20, from Puchong is one of the beneficiaries of the free lunch provided by Raashi Kitchen.

The new father said besides supporting his young family, he supported his in-laws after his father-in-law fell ill and was now jobless.

“I am very grateful to the restaurant owner for lessening some of my burden.

“I know how meaningful the food aid is for those in need. So, I also help the owner deliver food to others who are unable to travel to the restaurant to collect the meals, ” he said. 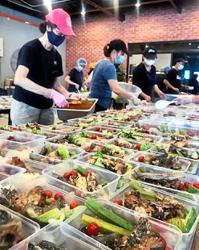