SEGARI, located in the district of Manjung, Perak is blessed with abundant flora and fauna.

Its coastal hill forest – the Segari Melintang Forest Reserve –is also the biggest of its kind in Peninsular Malaysia.

However, the forest reserve is slowly shrinking from its original size of 4,000ha to only 2,600ha now, say environmentalists.

It continues to lose more areas, believed to be due to logging and quarry activities.

Environmental activists are unsure if the activities are illegal or have the required permits from state agencies. 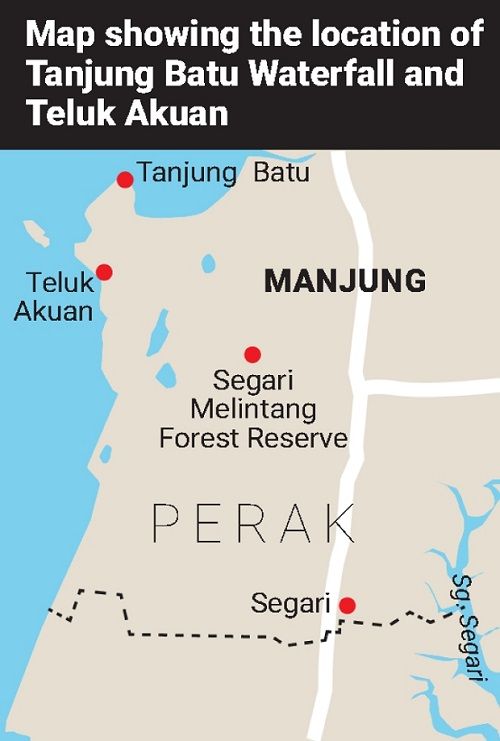 “During our investigation, we found murky water flowing into one particular area of the beach.

“We believe this is due to red soil being washed down from the cleared jungle areas.”

He said a plot of land, about 8ha in size, near the forest reserve, had been leased to a private company for an unknown project.

“We are still investigating this project. It may be either for logging or quarry activities,” he added.Noor Ismady also questioned whether any action would be taken by the state Environment Department (DOE) against the landowner for polluting the beach.

“We worry if no action is taken by the authorities, the situation will worsen.”

Kuasa claimed that several applications were made to the state government to conduct more quarry and logging projects at Teluk Akuan, located not far from Tanjung Batu.

In January, Kuasa had urged the state government to stop all quarry activities in Tanjung Batu after a waterfall there was found filled with debris from soil erosion, believed to be caused by a nearby quarry.

Photographs of the dry waterfall went viral on social media.

However, state environment committee chairman Mohd Akmal Kamarudin had said the area depicted was a seasonal stream that formed only during a downpour as a reservoir was located nearby.

He had also said that a stop-work order was issued to the quarry operator to carry out remedial work at the stream area.

Noor Ismady said quarry activities in the area had stopped due to the movement control order.

“After the media reported on the incident at the waterfall, efforts were made to repair the damaged area, including planting trees and grass.

“However, we have been informed that another quarry project near the waterfall has been approved.

“We are deeply concerned about what will happen to the waterfall.”

Noor Ismady said although they were glad that remedial works had started near the area, it would take at least 30 years for the trees to grow as big as they used to be.

“We really do not want a similar incident to recur and hope the state government will take immediate action to stop all activities near the waterfall as well as at Teluk Akuan,” he added.

A visit to the waterfall showed that several areas nearby were covered with thin grass and small trees.

“The most DOE can do is issue a stop-work order, which is only a temporary measure.

“The state government needs to step up and stop everything before we lose Teluk Akuan and Tanjung Batu completely.

“Teluk Akuan is located at Compartment 20 of the forest reserve.

“We have evidence to show that an application has been submitted to conduct quarry activities at Compartment 19, 20 and 21, covering about 122ha,” he added.

For Compartment 21, Meor Razak said about 20ha had been degazetted as private land.

The area, he added, was now identified as Lot 2744 and clearing had been done as red soil could be seen.

He also said that currently, only about 50% of the Segari Melintang Forest Reserve remained.

“We demand an urgent intervention to stop the destruction of the forest,” he said.

“No new permit has been given in the area.

“A contractor is doing the rehabilitation work at the affected area and this is being monitored by us and DOE,” he said.

On matters involving Teluk Akuan, he said he would have to check on the data first.

If the affected area was privately-owned, Mohamed Zin said

the landowner could clear the land.

“However, to transport the logs they need permission from our department first.

“As for the red soil, it falls under the Manjung Land Office’s jurisdiction,” he added. Mohamed Zin denies a quarrying permit was issued for activities near the Tanjung Batu waterfall.

Noor Ismady (right) is worried about soil erosion at the Tanjung Batu waterfall.

Meor Razak wants the state government to stop all form of activities at the forest reserve.

Red soil flowing from the nearby forest down into the Teluk Akuan beach due to logging activities.

A hill near Teluk Akuan beach totally cleared of vegetation, believed to be caused by logging activities. 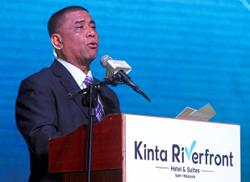