Anchor of the family

Just the four of us: Afif Afham showing his children — (from left) Tianna, Thalia and Mikael — how to incorporate design-thinking elements in their schoolwork and game time. — YAP CHEE HONG/The Star

Fathers are making the most of trying times to connect with their children and strengthen bonds. StarMetro shares the joys and challenges these men face in conjunction with Fathers Day tomorrow.

FATHERS Day is more than just an occasion to get dad a new tie or treat him to a nice meal.For some, when reflecting on the best gift they could have given their own fathers, the common response is “quality time spent together”.

Devoting precious moments together is even more important now with the Covid-19 pandemic in our midst, as strong paternal ties with children are precious and needed. The challenges, however, are immense, especially for fathers who are heads of the household or even single dads.

For Yong Yek Ming, 56, being a parent to two autistic sons Wei Jie, 21, and Wei Xiang, 20, has changed his perception of fatherhood.

“It is definitely much more challenging being a single father.

“To me it is ‘parenthood’ because I was brought up in a family where men and women are equal at home.

“My mum was a strict parent and I did household chores as well.

“There is not much difference between a single father and single mother because both have to do more for their children, ” he told StarMetro.

Taking care of one autistic child is equivalent to caring for 10 children, said Yek Ming, a divorcee. Wei Jie, is non-verbal while Wei Xiang has high-functioning autism, both in the Autism Spectrum Disorder (ASD).

“I have to spend more time with Wei Jie because he is prone to temper tantrums and needs to be taught skills like toilet training and preparing food.

“My objective is to make him independent so he can take care of himself but he requires long-term care.

“The worst case scenario is getting him a caregiver in future, ” he added.

Yek Ming, an engineer by training and a businessman, said it was imperative to create more awareness of autism in society.

During the early stages, he said it was difficult as he would get rude looks and comments from the public whenever he took his sons out.

“I was put off by it. I received comments like ‘if you cannot control your child, stay at home’.

It was then that Yek Ming and his sons became part of the inspiration behind award-winning Malaysian movie Redha in 2016, directed by Tunku Mona Riza.

The movie was selected to represent Malaysia in the Best Foreign Language Film category at the 89th Academy Awards in 2017.

It tells the story of a family’s struggle to confront the harsh realities of raising a child disabled by a condition they knew little about.

For children with autism, quality time is a subjective term, said Yek Ming.

“My sons are happy to get more time with me.

“The problem is I cannot get them to socialise with other people because they lack social skills and I cannot keep them at home too long either, ” he said, adding that if it was not for the lockdown, the boys would be learning life skills — cooking, handling household chores and managing money — at Parents Resource 4 Autism Centre in Sri Petaling.

How does Yek Ming cope with a dual-parent role?

“I cannot be as good as a mother in some aspects, ” he said.

“Mothers have innate love and compassion.

“But for me, there is no separation between the roles of mother and father.

“If a father does not know how to cook, he can learn from YouTube now.”

Being a single father for Afif Afham Arsad, 38, means reassessing how minutes are spent in a day.

When he was married, the former pilot was free to focus on his career, find a side hustle and had more time for activities with his children Mikael, 12, and nine-year-old twin daughters Thalia and Tianna.

“But it’s interesting how limitations and difficulties teach me perspective and focus. Afif Afham and his children doing chores around the house together. - Photo: YAP CHEE HONG/The Star

“Being a single father, I have managed to dig up extra minutes in a day.

“I love that I can bring my children along in my journey of work and design, involving them in the process.

“Sometimes, the insights from them actually match the feedback I receive from my peers, ” he said.

Afif Afham was forced to change careers, from being a pilot for 17 years to a user experience/user interface (UX/UI) designer, because of the Covid-19 pandemic.

While he can easily focus on learning something new from scratch on his own, he chooses to get his children involved in his new career.

“I taught them design while learning it myself, and incorporated design-thinking elements in their schoolwork and game time.

“To see them putting all these non-traditional education elements together is so heart-warming, ” he said.

Afif Afham highly values the routine of running his household along with his children.

“We don’t call it chores.

“It’s just things we need to do to maintain a home filled with love.

“For example, if I say ‘shut it down’ at about 7pm, the kids set the house up for night-time.

“It’s like having a personal assistant but with chubby cheeks to pinch, ” he joked.

Being a single parent is also about having good mental health.

“I’m wired differently so I cannot parent like others, ” he explained.

“I am grateful that my children and I are on the same frequency about this.

“I use my design elements and purposeful games to educate them about critical thinking and resilience (in life).”

But he admitted that sometimes his professional and parenting responsibilities could get overwhelming and test his patience.

“It definitely does break me every now and then but it is just smart to accept reality and recover quickly, ” he said.

Afif Afham’s message to all single fathers is to have a clear goal in life.

“My life decisions are centred around my children’s well-being and safety.

“There were overseas job opportunities last year that my friends thought I should grab quickly but those offers meant I had to be apart from my children so I declined.

“More importantly, get all the help you can when you need it.

“My family has been extremely helpful.

“Parenting is not about being a flawless homemaker.

“A child’s marinara-stained white shirt when cooking together has more value than an Instagram-worthy dining table, ” he said.

After his soon-to-be two-year-old daughter Liberty came into his world, Rithan Vijay, 41, learned to appreciate things he had forgotten.

Fatherhood, so far, has been a rollercoaster ride of emotions. Rithan enjoys spending time with his daughter Liberty as he plays the guitar at home.

“I am still learning something new every day.

“I have this new sense of responsibility, which I never had before, and I am constantly reminding myself it’s not about me anymore, ” said Rithan, adding that sacrificing frequent meet-ups with friends was part of the package of being a new parent.

Rithan, who does freelance work from home, is also a musician and former talent division head at Astro.

He said there is no manual for fatherhood.

“It is just like music, you learn the rules and then you improvise.

“I just pray that I can be the best person I can be for my daughter, ” he added.

The pandemic has given him a chance to spend more time with Liberty.

“I am grateful for this and I try to adapt to what she likes to do.

“We watch cartoons in the mornings — our current favourites are Lucas The Spider and Minuscule.

“She helps me feed our cat, dog and fishes and she always wants to complete tasks on her own.

“It’s like having my own personal helper, ” he laughed, adding that most of the time, she likes reading, colouring or painting.

“My wife deserves the utmost respect because it’s not easy being on demand 24/7.”

“I want to shield this little person from the evils of this world, although I know that is impossible.

“I got to know my self-worth and moved away from things which do not make me happy anymore, ” he said.

“I have to be well in order to set a good example for my daughter.” 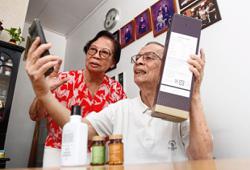