At a time when double masking is encouraged for maximum protection against Covid-19, it has come to light that some sanitation workers are not wearing necessary protective gear as they go about their work.Welfare and animal rights group Persatuan Penyayang and Kesaksamaan Kuala Lumpur (PPKKL) president Idris Moktar shared his observations of sanitation workers accompanying rubbish trucks on their rounds in Kampung Baru and the Chow Kit area.

“Watching workers handle bags of rubbish with their bare hands leaves me to wonder if they have been properly briefed on the possible dangers of infectious materials like used sanitary pads, diapers or face masks, which are regularly found in domestic waste.

“As some of the workers are foreigners, it is possible that they may not understand what is being said at daily briefings though they are seen wearing masks and gloves when they clock in for inspection.

“Ideally, there should be instructional pamphlets printed out in the workers’ native tongue so that the message on donning personal protective equipment (PPE) can be effectively conveyed,” he told StarMetro.Former SS20 Rukun Tetangga (RT) chairman Eileen Thong, who echoed Idris’ sentiments, said masks, gloves, safety footwear and sanitisers should be part of these workers’ standard operating procedure while on their collection rounds.

“Seeing the workers touching rubbish without gloves and wearing their masks below their noses or on chins is worrying as our waste now consists of thousands of used face masks,” she added.

Environment and waste management specialist Dr Theng Lee Chong agrees that donning PPE is compulsory for workers in this sector by international standards.

In fact, it is essential for their safety.

“In a housing estate, for example, there is no way of knowing who are the users of the discarded items.

“So for their own safety, workers should not even open the rubbish bags to rummage for recyclables as they may come in contact with needles, bandages or even drinking bottles used by individuals who have infectious diseases.

“At the very least, they should have aprons, gloves and rubber boots to safeguard against exposure to possibly harmful bacteria, which may be present in the rubbish as well as leachate coming from it,” he stressed.

In a study led by Professor Kamruddin Ahmed, director of Borneo Medical and Health Research Centre at Universiti Malaysia Sabah, it was revealed that urban sanitation workers were among the occupations that have a high risk of contracting leptospirosis as it required contact with waste.

During his research, blood samples from 303 sanitation workers in Kota Kinabalu were tested in 2017 and 133 tested positive for leptospira, a bacterium that causes leptospirosis.

In an urban setting, leptospirosis can spread to humans through rat urine in rubbish areas.

At its most severe, the disease can cause kidney failure and brain damage.

With this in mind, retired broker and Taman Desa resident Kenny Tan said waste companies must take a top-down approach in this matter.

“Management must prioritise its ground crew’s welfare and health, and not treat it as a micro issue to be left to their supervisors to handle.

“It all boils down to having checks and balances.

“Having such standards in place will also reflect well on the company,” he opined.Policies in placeKDEB Waste Management (KDEBWM) general manager of operation Mohd Idris Mohamed Yusof said the SOP for sanitation workers collecting domestic solid waste was to don safety shoes and reflective vests as stipulated in the agreement with their contractors.

“The compulsory inclusion of face masks was introduced at the start of the first movement control order in March last year,” said Mohd Idris.

To minimise the risk of exposure to infectious diseases among ground crew, they were to make full use of the bin lifter on refuse compactor trucks instead of holding rubbish with their hands, he added.

Constant reminders to wear PPE are also given on a daily basis during morning briefings before work starts.

Mohd Idris said at these briefings, workers were told that they risked being exposed to Covid-19 or other infectious diseases if the SOP was not followed.

Ground crew were also required to observe physical distancing of at least one metre when dealing with the public.

“A gentle reminder will be given to contractors whose workers are seen not complying with the agreed SOP.

“If they continue to flout the SOP, they will be fined up to a maximum of RM500 for each offence,” he added.

On medical insurance for workers in case of hospitalisation, Mohd Idris noted that there was an existing workmen’s compensation insurance providing cover for its local crew.

KDEBWM also has a corporate social responsibility programme, where donations are given to crew members if accidental injuries occur in the course of their duties.

Since the start of the MCO last year, the company has donated 17,000 face masks and 1,000 bottles of hand sanitiser to their subcontractors.

According to KDEBWM Kajang operation head Abdul Razak Abu Talib, the public has a proactive role to play when it comes to the safety of rubbish collectors.

“In addition to encountering setbacks like theft and acts of vandalism of metal leach bins placed at communal rubbish collection areas, the ground crew often has two major challenges.

“This includes improperly tied up rubbish bags, which result in waste spillage, and piled up rubbish, making it too heavy to be hitched onto the bin lifter.

“So, the ground crew has little choice but to haul some of the rubbish bags into the compactor truck to lighten the load of the leach bin,” he explained.

“They also have to pick up the scattered rubbish and this needs to be done in the shortest time possible, as trucks have to stop on narrow public roads during collection service. If the process takes too long, it causes a traffic jam.

“Rushed for time, workers often resort to doing the job by hand as it is a faster solution,” he said.

Another problem faced at these communal rubbish collection areas is traders also dump their rubbish there, resulting in excessive waste.

Abdul Razak said commercial entities have to deal with their own waste and not throw them in these areas, which are only meant for residents.

To top it off, bulk waste such as mattresses and used furniture are also disposed of at these areas, where rubbish is collected thrice weekly.

“It will be helpful to the ground crew if the public can take a mindful approach to rubbish disposal.

“At the very least, they should secure their waste disposal bags to prevent spillage,” he said.

To ensure the safety of its ground crew, KDEBWM would be conducting regular checks on PPE usage, its media and public relations head Mahfuzah Muhammad Tarmidi told StarMetro.

Likewise, Alam Flora chief executive officer Datuk Mohd Zain Hassan has also addressed this issue on its website, assuring that field staff are constantly reminded to wash their hands and use sanitisers.

The wearing of PPE is also compulsory for them.

Mohd Zain said steps had been taken to prevent its field staff from being infected with Covid-19.

This included mandatory body temperature checks for all employees at headquarters, state offices, depots and mustering points before they start work.

Those with a temperature reading exceeding 38°C would be sent for medical check-ups immediately, he added. 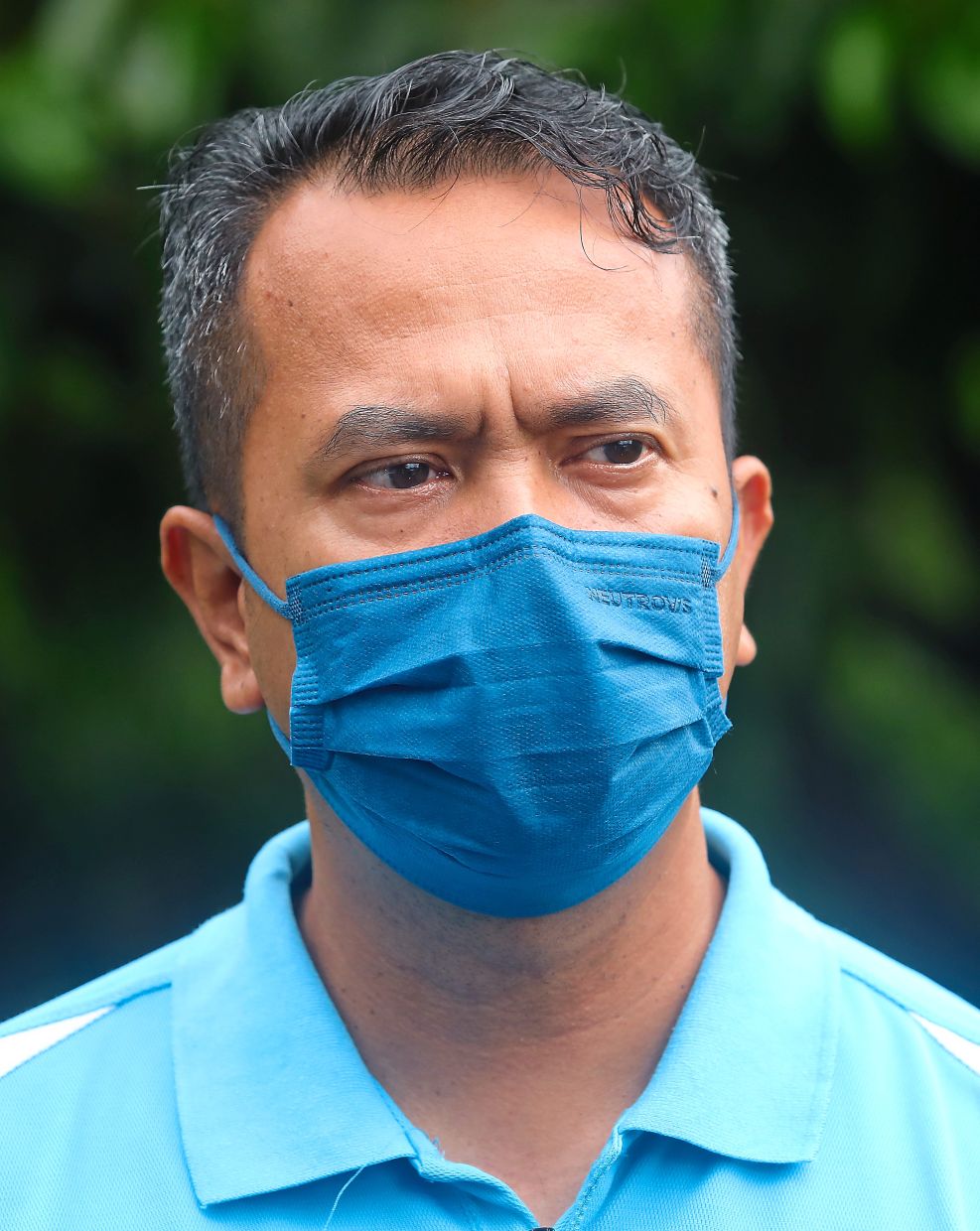 Ungloved and unmasked, a rubbish collection worker clearing rubbish from a housing area in Subang Jaya with his bare hands.

KDEBWM rubbish collectors moving a leach bin to hook onto a bin lifter which is fixed on compactor trucks. When the bins are too full, part of the rubbish has to be removed by hand first. - SAMUEL ONG/The Star