Part of the handrail on this pedestrian bridge in Taman Intan Baiduri Phase D is missing, posing a risk to users.

Residents said the bridges — which cross over a monsoon drain and connect Taman Intan Baiduri Phase C and Phase D — had not been maintained and were dangerous for pedestrians to use.

The handrails are rusty while the metal plating on one of the bridges is loose.

Victor Chiam, 67, said residents used the bridge as a shortcut to get to the commercial area of Taman Intan Baiduri.

“Many students use the bridges as there are two schools within walking distance of the residential area.

“It is also used to get to the playground at Jalan Intan Baiduri 10D, which is the only one in the neighbourhood.”

Chiam also said that senior citizens had difficulty accessing the bridges because of the steep stairs to get to them.

“If these pedestrian bridges are upgraded, it will encourage more people to walk to the commercial area or playground instead of driving there, ” he added.

“It will be better for DBKL to rebuild the bridges with concrete so that they are more stable and last longer.

“They should also ensure that the bridges are level with the road so that they are more accessible, ” he said.

On another matter, Yee hoped that DBKL would also regularly maintain the playground at Taman Intan Baiduri.

“The playground sets and other infrastructure in the neighbourhood are not in good condition and need to be replaced.

“The residents also hope that DBKL can build a jogging track around the park, ” he added. 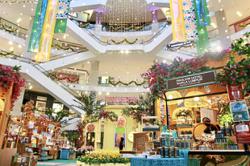