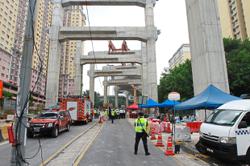 Cars parked along Persiaran Hijauan Residence by hikers heading into Apek Hill in Cheras are an inconvenience to nearby residents.

HIKERS at Apek Hill in Cheras, Selangor are urged not to park their cars by the roadside as it is a nuisance to residents of surrounding neighbourhoods.

“Things are especially bad in the early morning on weekends as there will be an influx of hikers.

“The cars parked on the roadside are causing inconvenience to residents and also a concern in the event of an emergency, ” he said.

The assemblyman’s office, said Farhan, had also consulted the Selangor Forestry Department on the hill’s status.

“We are told this hill is considered a closed forest, which means one must obtain a permit from the department before venturing in.

“The permit is important to ensure the department has a record of those who trek up the hill, in case of an accident or emergency, ” he told reporters after visiting the hill’s entrance near Hijauan Residence.

According to Farhan, the Forestry Department said it would increase checks at Apek Hill to ensure hikers complied with its rules.

“We have also been told that the department limits the number of visitors to the hill at only 100 a day, ” he said, adding that MPKj was in talks with the department to instal signboards to remind visitors to apply for a permit before entering the hill. — By FARID WAHAB