Uphill task: Illegal dumping of plastic shredded waste and other plastic materials off Jalan Waja in Bukit Raja, Klang, has turned the slope into a 15m-high hillock. — SS KANESAN/The Star

HUGE piles of shredded industrial plastic waste, broken plastic fittings and renovation debris have been dumped on a vacant piece of land in Klang over a 10-month period since April last year.

The illegal dumping of waste on the 0.8ha land off Jalan Waja in Bukit Raja had turned the slope at the site, which overlooks an oil palm plantation, into a 15m-high hillock of rubbish.

The eyesore is located just 8km from the Klang Municipal Council (MPK) headquarters.

Until last month, when the site was closed down by the authorities, the waste was regularly set ablaze in the wee hours of the morning as a way to create space for more material to be dumped in the area.

A former worker at the illegal dumpsite told StarMetro that when he was employed as a fee collector there, RM30 was charged for each tonne of waste dumped, compared to RM55 per tonne at proper landfills.

“I needed a job and I was told to work at the site to collect the dumping fee. It was a short stint, just six days.

He claimed that at least 45 one-to-three-tonne lorries would come to dump waste daily.

“I hated the acrid smell and smoke from the burning waste. I left soon to work at a restaurant in Kuala Lumpur, ” said the worker, who was paid RM80 a day to collect fees at the site in October 2020.

“This sudden deluge of plastic shredded bits come from factories that hire third parties to dump the waste.

“Most of the waste here is from other districts in the Klang Valley.

“Dump truck drivers have their own WhatsApp network and avoid going to the landfill in Jeram, Kuala Selangor. Instead they resort to illegal dumpsites that are situated closer and charge less, ” he explained.

“Our JPP enforcement team had carried out surveillance operations.

“We were successful in nabbing three four-tonne lorries red-handed dumping plastic waste in January, while another eight-tonne vehicle was seized last month, ” he added.

The enforcement team had set up wooden barriers to stop lorries from using the earth road leading to the site, but these had been removed.

On Feb 16, an industrial plant nearby reported a raging fire at the site to the Selangor Disaster Management Unit, Klang District Fire Department, Klang District Land Office and MPK. The burning of waste caused an unbearable, strong acrid smell that swept through Klang town, some 10km from the site, due to strong breeze, resulting in numerous complaints from residents.

After the fire was put out, MPK stepped up action to ensure there was no repeat of the incident.

“We have blocked the earth road to the site with large concrete boulders while enforcement staff continue checking the area at random several times a week, ” he said.

He said it would take Federal agencies months to remove the waste estimated to be 3,000 tonnes.

“The majority of the illegal dumpsites are in isolated areas and the lands belong to either the Federal Government or Selangor government agencies.

“The council has contacted most of these agencies to clean up the sites.

“Private lots are also not spared. We have told the owners to clean up the land and put up barriers, if not they can be fined, ” he added.

JPP Enforcement staff member Aswarizal Mohd Wazib, who has been with MPK for 18 years, said illegal dumping did not only happen under the cover of darkness but also in the daytime.

And there are other challenges too, in the form of tonto gangs who shadow enforcement teams to tip off waste disposal companies and their agents.

“Our teams move from one area to another to conduct surveillance.

“Unfortunately, there are those in the illegal dumping syndicate who inform dump trucks whenever an area is free of surveillance, leading to more dumping of waste at the site.”

However, Aswarizal said MPK and his team were not deterred from conducting enforcement exercises.

In 2019,122 lorries were seized but last year, only 46 were seized as waste disposal companies grew fearful of stepped-up enforcement.

According to Obaidur, private waste disposal agents are feeling the heat from MPK’s aggressive enforcement.

He said their tonto gangs in four-wheel-drive vehicles that tailed the council’s enforcement teams had told private waste disposal companies to switch to dump areas in the outskirts of Shah Alam and Subang Jaya.

Aswarizal admitted that tonto gangs were a menace but said despite this, MPK’s continuous surveillance and successes in nabbing errant waste disposal companies had resulted in a decline in illegal dumping of industrial waste in areas under its jurisdiction.

“Even the illegal dumpsite at Sungai Rasau 36, where a 0.2ha land next to the KTM railway tracks was strewn with shredded plastic bits, had stopped operating due to our continuous surveillance.

“We understand KTM Bhd will remove all the waste soon, ” he said.

Zaireezal told StarMetro that in Klang district, 33 areas had been identified as illegal dumpsites.

“Our council will clear certain sites. But the areas under government agencies will be referred to them (for clean up).

A Selangor Environment Department spokesperson said illegal dumping was unlawful as it causes harm to the environment, be it by the roadside or even at secluded areas on the fringes of oil palm plantations.

“Officially designated areas with proper integrated waste management arrangements are in place and must be used for dumping.

“Companies have the legal onus to ensure that the dump truck engaged to remove waste from their plants holds a valid licence and that their waste will be disposed of properly at the landfill, ” she pointed out.

The spokesperson suggested that companies demand the landfill docket from the waste disposal agents as verification that the waste had been disposed of correctly.

They should also ensure that contracts for the future removal of waste depended on following this practice.

Disposal of one tonne of waste by private companies costs RM55 while local councils are charged RM36 at designated landfills.

“Companies who dispose of waste at illegal dumpsites are on the rise as they want to avoid paying high disposal fees at authorised landfills.

“Most private agents who resort to unscrupulous dumping say the RM55 waste collection fee is exorbitant. A better solution is to standardise the fee at RM36, which is what local councils are charging.

“If this is done, it will discourage private waste disposal agents from going to unusual lengths to dispose of waste illegally and risk having their vehicles impounded and fined.

“Illegal dumping puts the entire community at risk as the waste is burnt at the site, releasing toxic gases into the atmosphere, ” he stressed.

Devadass said the dumping of shredded plastic waste harmed the environment as it would contaminate the area, posing a danger to animals and water sources.

“I urge the people of Klang to work with MPK to inform them about illegal dumping as ratepayers was being wasted on cleaning up the mess brought about by illegally dumped waste, ” he added. 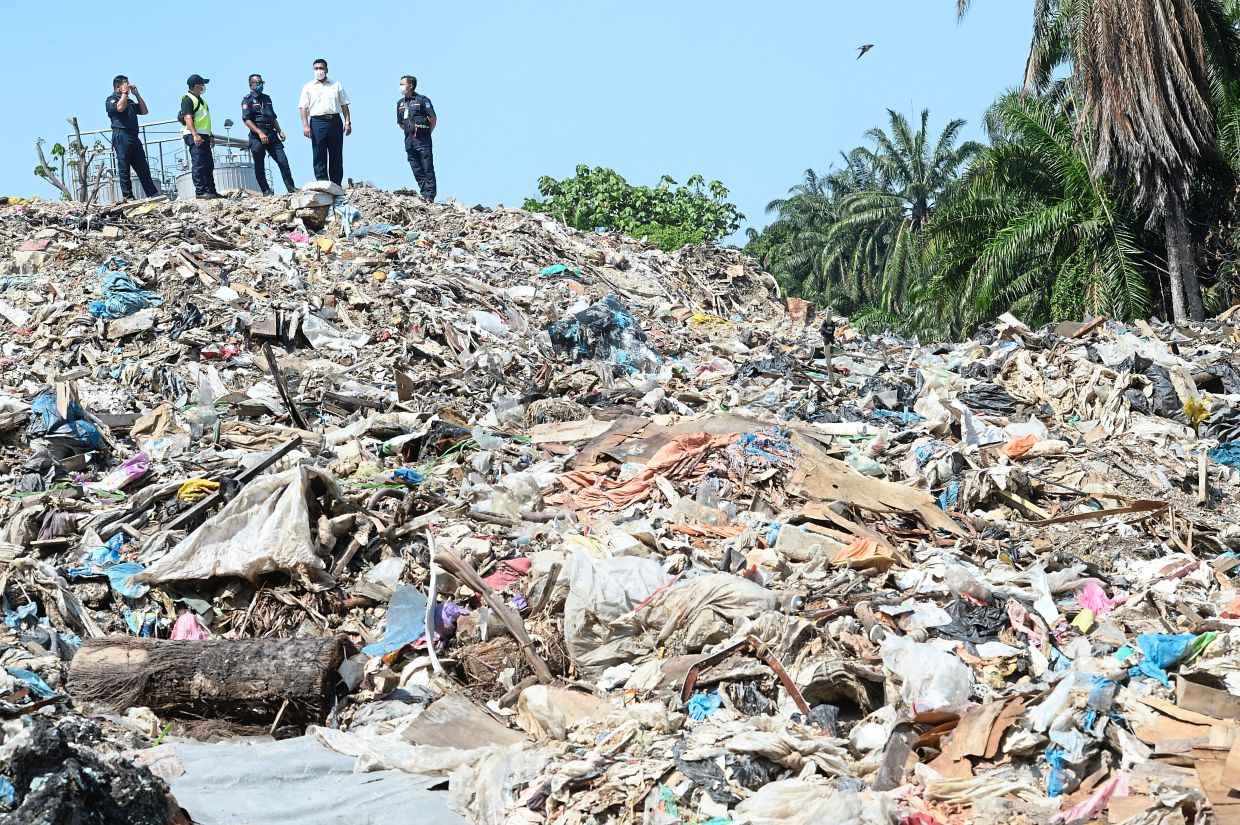 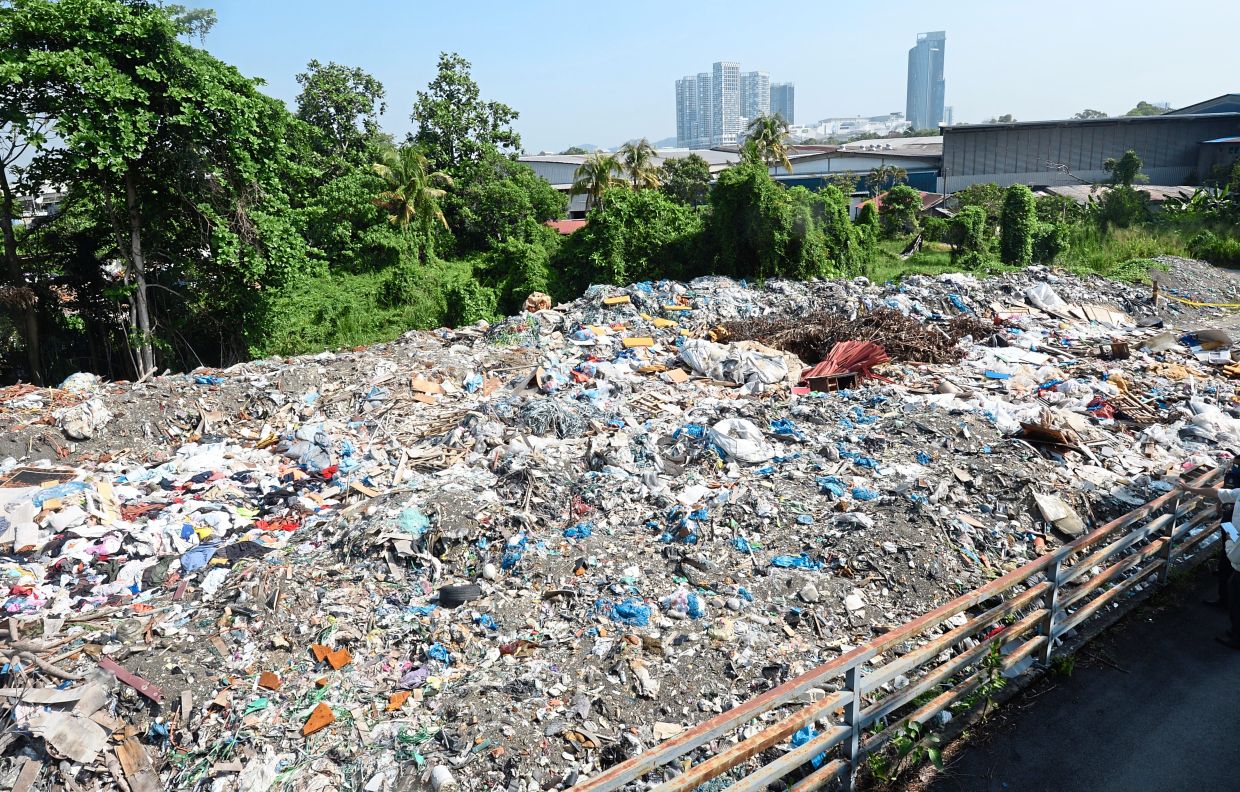 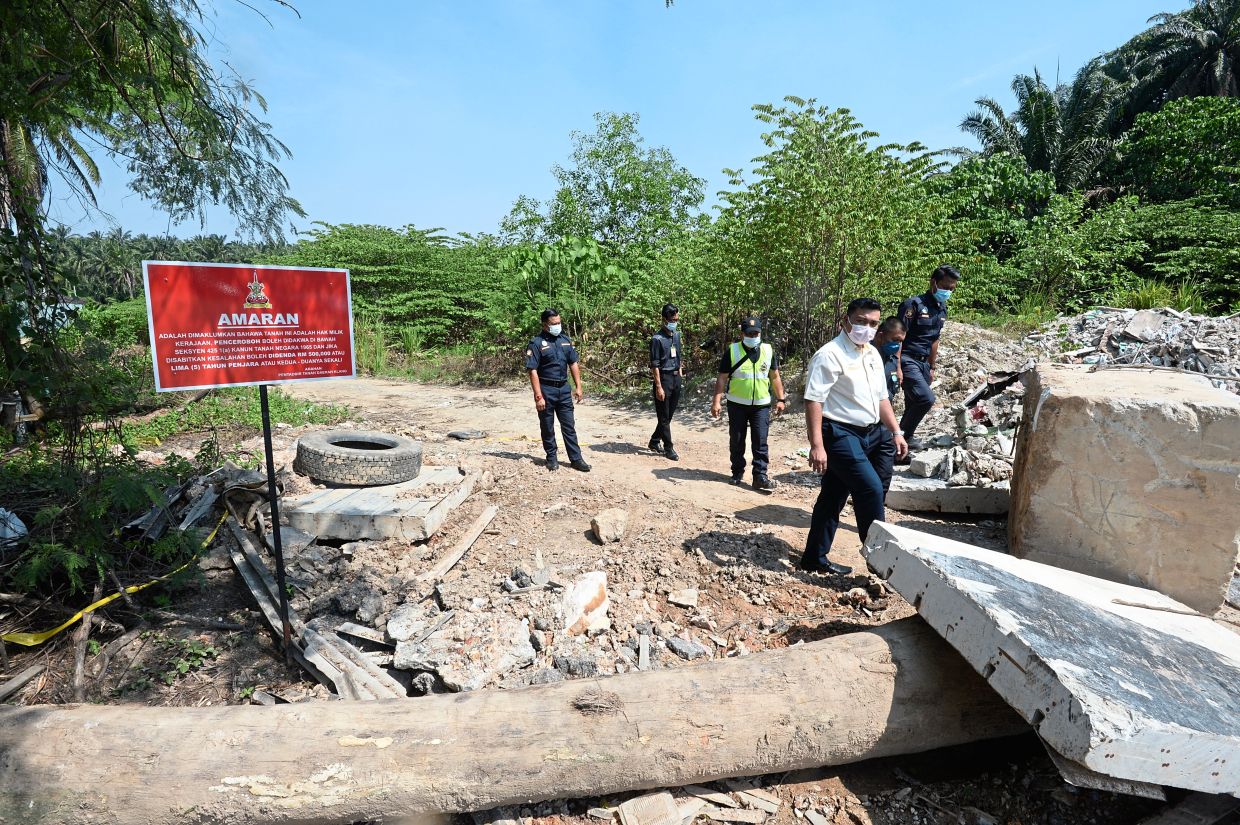 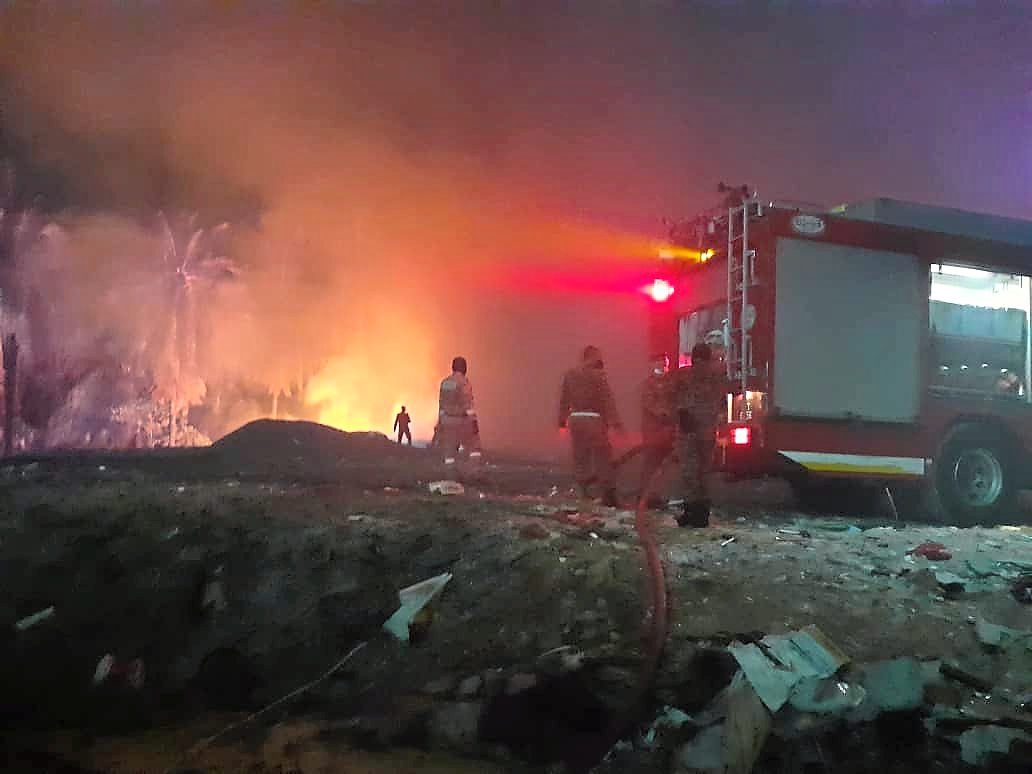 Uphill task: Illegal dumping of plastic shredded waste and other plastic materials off Jalan Waja in Bukit Raja, Klang, has turned the slope into a 15m-high hillock. — SS KANESAN/The Star

Huge piles of shredded plastic bits, plastic fittings and other materials are dumped at an illegal dump site at Jalan Rasau 36 in Klang. MPK closed off the site and KTM Bhd which owns the land next to the railway track will clear it soon.

The road leading to the illegal dumpsite off Jalan Waja in Bukit Raja has been barricaded with stone blocks.

Part of the at the dumpsite off Jalan Waja has become water logged after plastic waste was dumped and burnt at the site bordering an oil palm estate.

MPK to set up panel of approved waste disposal agents