MPK to set up panel of approved waste disposal agents

Ahmad Fadzli says for a start, MPK will register waste disposal companies that are new in the market.

COMPANIES in Selangor dealing in transportation or disposal of waste with businesses in Klang district may soon need to register with the Klang Municipal Council (MPK) to be placed on a panel of approved agents.

Called the Bulk Waste Contractors Panel (BWCP), it is aimed at building a list of companies that embrace best practices in transportation and disposal of waste.

MPK president Dr Ahmad Fadzli Ahmad Tajuddin said the council’s Environmental Services Department (JPP) had come up with a working paper on the proposal to have a panel of waste disposal companies.

“JPP aims to cut down on illegal dumping.

“Companies on the panel must take the proper measures to ensure waste disposal agents working for them remove and dispose of waste within the limits of the law.

“Waste disposal agents will be issued a licence that permits them to move waste for businesses in Klang district, ” he explained.

Ahmad Fadzli said firms in other parts of Selangor that wanted to move the waste in Klang also needed to be on the panel.

He added that the proposal had been discussed at the council’s Cleaning and Beautification Sub-Committee and the initial discussion revolved around the importance of having a registered list where factories needing to dispose of waste must appoint agents from BWCP.

“Our discussions are still ongoing as we need to see the viability of the proposed project.

“We want this to be a solution to illegal dumping, where we hope to work with certain companies to track the trucks of waste disposal companies.

“We may discuss this tracking approach with KDEB Waste Management as it has experience in doing this, ” he said.

Ahmad Fadzli said a tracking app would ensure waste collected was disposed of safely and responsibly.

“The sub-committee will meet on March 30 to obtain more input as we have requested for a special committee made up of department heads from the council’s Licensing, Engineering, Legal Department and Information Technology as well as councillors.

“If we are going to have a pilot project it must be a practical idea that works.

“For a start, we will register waste disposal companies that are new in the market.

“I believe the initial number of companies will be 80 on the BWCP.

“We hope to endorse the proposal in April and roll it out in August, ” he added.

Ahmad Fadzli said JPP would review the progress of the panel weekly.

“If it goes well, then in the long run unauthorised waste disposal companies will not be contracted by factories to remove their production waste, as all will have to refer to MPK’s panel.

“Our council will increase the membership in the panel as the project progresses, ” he said.

Klang Consumer Association president Devadass Anjan said MPK’s proposal to have a registered list of companies on the panel was a good idea as it allowed proper surveillance of dump trucks that would be fitted with a tracking app.

“But our association wants the council to issue the licence every six months and not annually.

“Authorised waste disposal trucks must have the licence at all times and if they commit an offence, such as illegal dumping, the licence for the company must be revoked immediately, ” he said.

Devadass added that the company’s name must also be blacklisted and listed on the BWCP website. 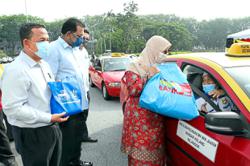