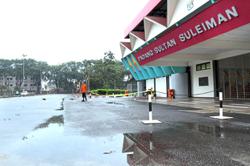 People, taking a slow jog at the Stadium Sultan Suleiman in Klang after it was reopened on Friday at 6.15pm.

A HIKING trail and a stadium, which is popular among brisk walkers and joggers, in Klang have been reopened with the announcement of the conditional movement control order (CMCO).

Authorities were earlier ordered to shut parks and hiking trails due to the movement control order.

Kuala Lumpur, Selangor, Penang and Johor are now under the CMCO up till March 18.

Both facilities were reopened at 6.15pm on Friday (March 5). Families, senior citizens and children were overjoyed as all took brisk walks while observing physical distancing.

Before, the Stadium Sultan Suleiman was reopened people were seen gathering at 5pm and walked outside the stadium on Jalan Padang but it was a small crowd, notably lower compared to days before the CMCO.

“Group activities like group tai chi exercise, aerobics or Zumba fitness workout are not allowed. We understand that people want to improve cardiovascular fitness and we suggest that people keep to brisk walk and exercise in their own space with strict standard operating procedure (SOP), ” he said.

Dawari added that both recreational facilities were reopened in accordance with the National Security Council (NSC) and Health Ministry’s suggestions.

“Our personnel who record the temperature at Stadium Sultan Suleiman want total cooperation from the people to either write their names in the log book or scan using the MySejahtera QR code. We need people to observe strict health protocols like physical distancing and not gathering in groups, ” he said.

MPK president Dr Ahmad Fadzli Ahmad Tajuddin said with more people out and about, the council would disinfect and clean public places as it is more pressing to curb the spread of the virus.

“We want people to avoid physical contact, including fist bumps and hitting elbows with one another as a form of greeting that replaced the traditional handshake. People must maintain a distance of at least one metre, ” he said.

MPK Corporate Communications Department director Norfiza Mahfiz said her department had received numerous calls on Friday, from the public who sought clarification if their businesses could operate and people wanted to know the time allowed for each trade.

“Our staff had noted the various questions put forward and in consultation with the NSC’s directive, we have posted notices on social media platforms on the type of businesses in Klang that are allowed to operate during CMCO as well as the permitted operating hours, ” she said.

She added that entertainment outlets, night clubs and pubs were not allowed to operate.