Staying safe: SPM candidates sanitising their hands and getting their temperature scanned before entering school in the early morning to sit for their first paper — Bahasa Melayu — at SMK Raja Tun Uda in Bayan Lepas, Penang.

SOME 19,919 SPM candidates in Penang will be sitting for their examinations from now till March 25.

State Education director Abdul Rashid Abdul Samad said the examinations will be held across 151 examination centres in the state.

“The candidates include those from private schools, boarding schools, sekolah agama and so on.

“For local schools, there are 18,128 candidates, ” he said when contacted.

Student Nurul Najwa Rizal Husaidi, 18, who waited for months to take the exams, was happy to finally take her first paper.

“My friends and I have waited so long for the exams. We are happy to finally get it over and done with.

“Although we do feel nervous about certain subjects, the wait has been even more stressful for us.

“We want to finish our SPM quickly and get it out of our minds.

“When it was announced that the exams would be postponed from October last year, we thought it was a short postponement and did not expect to only be able to take our exams in a new schooling year, ” she said.

Nurul Najwa said she did a good deal of virtual learning and revisions on her own and was quite confident with the exams.

“There are several subjects that I am more nervous about like Additional Maths, Physics and Chemistry.

“But overall, I think I can do well.”

Another student, Muhammad Akafha Rufli, 18, said he too was happy to finally be able to take the exams.

“I think this is a good start for us.

“I have only five subjects, Bahasa Melayu, Sejarah, English, Maths and Pendidikan Islam.

“These are subjects that do not give me pressure, other than Maths.

“As Bahasa Melayu is the first paper, I am not as nervous or worried.”

Muhammad Akafha said during the past few months, he had not been doing well in his revision but was happy to take the exams anyway.

“The few months at home had been quite stressful as I could not focus as well as I did at school.

“As there are always things to do or chores to help out with at home, making time to focus on my studies is harder.

Parent Razak Yusop, 50, who was met dropping his daughter off to school, said he was relieved that the students could finally take their exams.

“My daughter has been preparing for the exams since last year and it is a relief for her to finally take the exams.

“If this dragged out any longer, it would have been very stressful for them, ” he said.

While feeling nervous for his daughter over the exams, Razak said he was not too concerned about the safety of his daughter.

“I am sure the teachers will ensure complete adherence to the SOPs and since students will be seated separately from one another during exams, it should be fine. 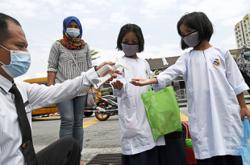