All is quiet at the ticket counters at the Sultan Abdul Halim ferry terminal in Butterworth.

The Penang Port Commission (PPC) chairman said that after a thorough discussion, PPC and Penang Port Sdn Bhd decided to adjust the operating hours during the MCO period due to the drop in passengers.

“We monitored the passenger flow from Jan 13 to Jan 17.

“From the five-day observation, we found there were only a handful of passengers from 8.30pm to 11.30pm.

Tan added that the adjustment was necessary to save costs.

“To ensure that the working community is not affected during the MCO period, we will have two speed boats operating

simultaneously during peak hours from 6.30am to 10am and from 4pm to 7pm.

“As for the old ferry carrying only two-wheeler vehicles, we have also shortened the operating hours.

“The last ride from Butterworth to the island will be at 7.30pm whereas the last ferry will leave the island for the mainland at 8pm.

“The service frequencies will remain the same during peak hours, ” he said.

Starting Jan 1, Penang’s ferry service saw a new era with the use of two fast boats for foot passengers while one of the old ferries is for two-wheelers only.

This is the interim phase until June 30 next year while the ferry terminals are being upgraded and hi-tech water buses and vehicular ferries are being built. All is quiet at the ticket counters at the Sultan Abdul Halim ferry terminal in Butterworth. 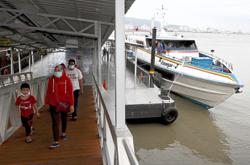