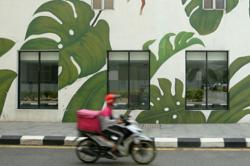 Syed Abu Thahir wiping the table at his stall in Jalan Larut which is patronised by few customers. — Photos: LIM BENG TATT/The Star

SOME eatery operators in Penang are still feeling the pinch as customers are staying away from eating out despite businesses now being allowed to operate until midnight.

They feel that their business has not improved even with the extended operating hours.

Among them is Syed Abu Thahir Abu Seeni Pakir, 38, who has been running a food stall at the Penang Island City Council Astaka (food court) in Larut Road for the past one year.

“We appreciate the government’s decision to extend our operating hours until midnight.

“My stall used to be packed during the night. Now, it is left deserted with only a few tables occupied by patrons, ” he said.

Syed said although he adhered to the standard operating procedures (SOPs), such as maintaining physical distancing, recording body temperature and properly displaying the QR code for MySejahtera, it was still difficult to get customers.

“My business has dropped by 70% and for the past few weeks, I have not been able to pay my staff their salary.

“Luckily, they understand my situation and I hope this will not prolong, ” he said.

Restaurateur Datuk Salim Manshoor said it was still too early to assess the situation after the government relaxed the condition by extending the operating hours of eateries.

“I t is still too early. Maybe if we wait for another few weeks, the customers will come back.

“However, things may get worse if the pandemic cannot be controlled and more people are infected.

“I urge all to strictly follow the SOPs mandated by the government so that everyone will not suffer economically, ” he said.

A check by The Star at several famous spots in George Town found them to be deserted with only a few people carrying out their usual activities.

Some of the shops in Chulia Street were also seen not opening their business for a few days after experiencing fewer customers.

Noor Hasliza Nusi, 34, a patron at an eatery, said people were still afraid to come out despite the extension as they were afraid of being in contact with the virus.

“The virus is in the community, and hence, people are still cautious and want to limit their time outside and prefer to stay at home.

“Those who have no choice, like me, have to go out as we have to buy food for our families, ”

Another customer, Mohd Fairuz Azmi, 42, shared similar sentiments and hoped there would be no more increase of Covid-19 cases in the state soon.

“We have to be vigilant. We have to strictly follow the SOPs as advised if we want our usual life back, ” he said.

He said the change in operating hours would be effective immediately.