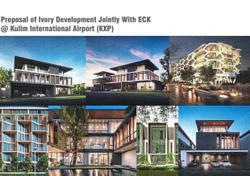 EVEN without the RM2bil Federal Government guarantee for the Bayan Lepas light rail transit (LRT) project funding, the Penang government will find a way to see the project become a reality.

State transport committee chairman Zairil Khir Johari said there was no question of dropping the project as the state had alternative plans to go ahead with it.

“The loan was guaranteed by the previous Federal Government and the present government should have honoured the guarantee, but we will continue with the project.

“The funding for Penang Transport Master Plan (PTMP), including the LRT, has always been the Penang South Reclama-tion (PSR).

“The land from the reclamation will finance the projects.

“Federal funding would have been good as it could accelerate the process rather than waiting for the reclamation to be completed.

“Nevertheless, we will still engage with Federal Government, which is an ongoing process and see if we can come up with funding, ” he said.

On the issue of a state government guarantee, Zairil said it was not possible as under the Federal Constitution, all loan guarantees must come from the Federal Government.

Putrajaya had decided not to proceed with the government guarantee for US$500mil (RM2.04bil) loan application by the state to partly finance the RM9.5bil LRT project.

Finance Minister Tengku Datuk Seri Zafrul Tengku Abdul Aziz said the decision was in line with the revised revenue and income projections for the country, as well as the government’s focus to restore the economy, following the Covid-19 pandemic.

Tengku Zafrul was responding in Parliament to a question by Chief Minister and Tanjong MP Chow Kon Yeow on whether the Federal Government would provide a government guarantee to Penang for loan applications to finance the LRT.

The Finance Minister said the ministry received a letter from Asian Development Bank (ADB) dated Jan 25 last year with regards to the application by the state government.

Tengku Zafrul said according to ADB’s financing terms, the loan would be charged a higher repayment rate and cost of financing and urged the state government to re-examine the projects based on priority.

Under the PSR project, the state government proposes to reclaim 1,821ha from the sea to build three islands off the southern end of Penang island to create a land bank to finance PTMP.

The RM46bil PTMP entails the construction of highways, LRT, monorail and a bus network throughout the state.